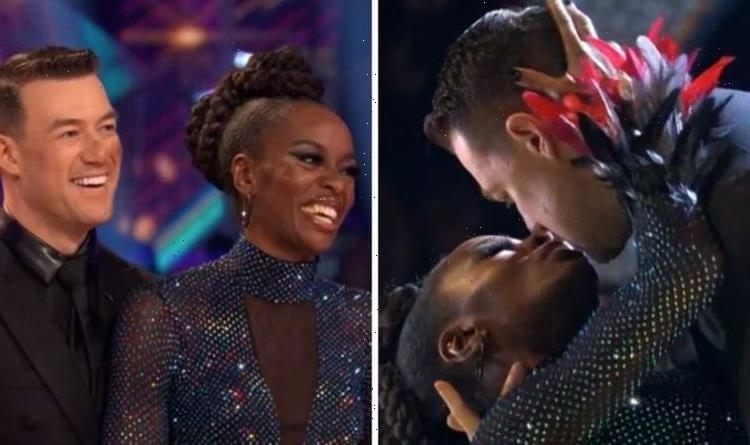 Kai Widdrington and celebrity partner AJ Odudu performed a sultry Argentine Tango to the Stevie Nicks’ classic Edge of Seventeen on Saturday’s instalment of Strictly Come Dancing. The risque routine sent viewers into a frenzy over the couple’s “peck” at the end of the dance routine.

Viewers took to Twitter to discuss the raunchy performance which saw Kai and AJ receive a standing ovation from head Strictly judge Shirley Ballas.
It looked as though the duo shared a kiss at the end of their Tango as they stood lip-to-lip while the audience applauded them.
Sumeya tweeted: “Did he go in for a kiss at the end?”
Adam Barnes added: “Little peck at the end? Who can blame her?!”

READ MORE: Bake Off ‘golden rule’ which must be adhered to exposed

Grace Cole remarked: “IS ANYONE GONNA TALK ABOUT THE NEAR-KISS AT THE END?!!!!!”

Liz S added: “Nearly a kiss there, it was so intimate – something is going on there.”

@Lovedbyyou Tweeted: “They REALLY are in a league of their own, and I don’t even know if two people can PRODUCE any more heat and chemistry, without having to move to another NETWORK!!!”

Dean Hannah commented: “#Strictly curse was nearly shown by @AJOdudu and Kai on the dance floor. Amazing dance but they were so wrapped up that they almost kissed at the end. Good luck to them if they are falling for each other.”

The Strictly judges were taken aback by AJ and Kai’s “terrific” dance, although Craig Revel Horwood said he would have liked to have seen more content.

However, a thrilled Shirley Ballas said: “This is, for me, about as good as it gets. It was world championship level and was just outstanding.”

She added: “I found the passion to be absolutely there, so for me, it didn’t look choreographed.

“I liked the flow, and I liked the whole concept of it. It was the best dance so far.”

AJ and Kai were overwhelmed by the judges’ glowing comments when they were speaking to host Claudia Winkleman following their performance.

When it came to the scores, an impressed Shirley awarded the duo with a 10, Craig Revel Horwood and Motsi Mabuse gave them an eight, and Anton Du Beke handed out a nine.

This brought their total score for the night to 35.

Rose Ayling-Ellis remains the red-hot favourite to win this year’s series, according to the bookies.

It’s just an 11/10 chance with Ladbrokes that the EastEnders actress will take home the Glitterball Trophy with pro partner Giovanni Pernice.

This leaves John Whaite and Johannes Radebe second in the betting at 5/2.

TV presenter AJ Odudu and Strictly pro Kai Widdrington are fancied as a 5/1 shot to the trophy, but the rest of the competition have found themselves with odds of 16/1 or bigger to win.

Strictly Come Dancing airs on Saturdays at 7pm on BBC One.