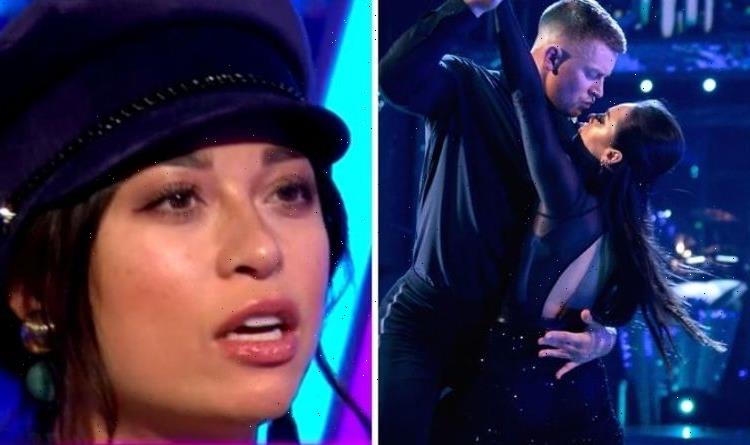 Strictly: Rylan asks Katya and Adam about their 'saucy' dance

Olympian Adam Peaty, 26, and professional dancer Katya Jones, 32, set tongues wagging following their sultry performance on Strictly Come Dancing last weekend. The gold medalist and Russian-born dancer appeared on Friday’s instalment of It Takes Two where host Rylan Clark-Neal quizzed them on their “saucy” Argentine Tango which ended in a near kiss.

The Strictly duo appeared close to kissing at the end of Saturday’s routine after viewers noted the “intensity” of their performance.

The steamy dance amazed the judges and placed them near the top of the leaderboard.

Appearing on BBC Two’s It Takes Two, Rylan, 32, couldn’t resist probing the couple about the routine.

He said: “It was a big night for you guys on Saturday, what did it mean for you to bounce back from where you were?

A relieved Adam replied: “It meant absolutely everything, the Argentine Tango was a hard dance.”

Rylan chimed in: “It was just so saucy.”

Adam agreed with Rylan, but insisted the dance appeared to come off as saucy because he and Katya had gotten “so into playing a character”.

“It was amazing, I really, really felt at home there,” he gushed.

When Strictly pro Katya was asked what she thought of the intimate dance routine she explained: “The thing is that we kept getting different comments from the judges.

“We were working on our technique really hard but they kept saying, ‘Oh you know, you’re just not connecting to the music or the emotion’.

“So we started to think completely differently and thought, ‘Right, what do they want from me and what’s the emotion attached to it?’

“I think we definitely improved on that level and I know Craig [Revel Horwood] said it was maybe a bit blocky, but [Adam] is still learning how to dance and how to move his body across the floor.

“This is going to be an ongoing thing technically, but I think all the little bricks are coming together and we are building this beautiful wall.

Divulging back to their Argentine Tango, Rylan asked: “It was a bit of an intense routine for many different reasons.

“We need to talk about those leg kicks – I mean [Adam] you were bruised? Are you all right?”

Adam admitted his arm was suffering following last Saturday night’s performance with Katya, but he reassured Rylan that it was “just part of the game”.

“I am going to give it absolutely everything and I don’t want to look back and think I should have given it a bit more,” the Olympian added.

The couple scored an impressive 32 for their Tango which they both thought was an “incredible” achievement.

They will be returning to the dancefloor on Saturday night performing a Samba to George Michael’s Faith.

Strictly Come Dancing continues on BBC One on Saturday, while It Takes Two airs weekdays at 6.30pm on BBC