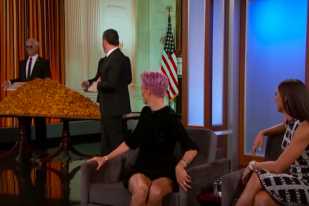 The U.S. national team stars guested on “Jimmy Kimmel Live” Thursday, when the topics of discussion spanned from Megan’s pink/purple hair, to equal pay, to our president’s nonexistent (yet, at least) invitation for lunch at the White House, which the soccer stars had preemptively said they’d decline.

At his big D.C. home, Donald Trump has served fast food to both the Clemson Tigers and the North Dakota State Bison football teams, celebrating their respective football (not to be confused with the international football) national championships. Anyway, Kimmel had two dipping sauces.

Before that feast, it was time for a (semi-) serious discussion.

“This has become a big topic of conversation: You want equal pay, which, by the way, I think is a mistake,” Kimmel said to his guests. “Shouldn’t you be paid more?”

After all, the American men have never won a World Cup — hell, they didn’t even qualify for the last tournament — and the women have taken their last two in a row.

“We’re taking you to mediation with us,” Rapinoe said.

And yes, they also talked about that 13-0 victory over Thailand, too.

“Do you think you’ll ever be allowed to go to Thailand?” Kimmel asked.

Morgan and Rapinoe sure hope so — it was a bucket-list trip for both of them, they said. Might wanna give it a few years, ladies.

Watch their segment via the video above.