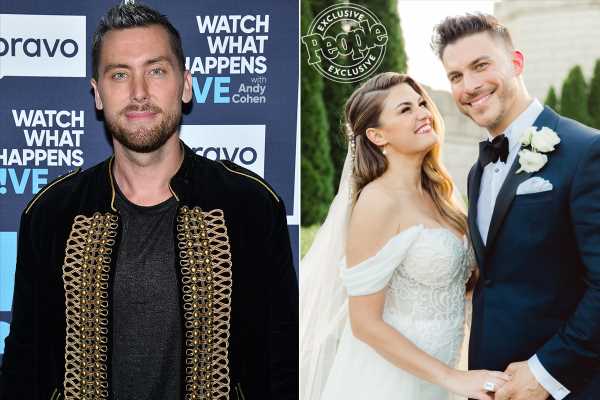 Lance Bass did a little too much talking at Brittany Cartwright and Jax Taylor‘s wedding.

After officiating the Vanderpump Rules stars’ Kentucky nuptials in late June, the former NSYNC member, 40, got himself into trouble when he started spilling secrets about another couple from the Bravo series.

“You know I’m talking about the wedding and what happened, and then there was one little nugget of a storyline that I didn’t realize probably no one knew yet,” Bass told PEOPLE Now on Thursday.

Although he was at first resistant to elaborate on the gossip, the singer caved.

A few weeks after the wedding, Bass accidentally revealed on the Bleav in Reality Bytes podcast that the VPR group recently found out Schwartz, 36, and Maloney, 32, weren’t legally married during their 2016 ceremony, and that the situation might be covered on the upcoming season.

He later apologized for the slip-up during an appearance on Strahan and Sara.

“People forget that I’ve been in entertainment news for the last 15 years,” he said. “So, you know, when there’s pieces of nuggets out there, I’m going to talk about it. I didn’t know it was a secret.”

After the news went public, Schwartz and Maloney decided to move forward with their (actual) nuptials. Last month, a source told PEOPLE that they would be heading to Sin City to make it official, and it will be filmed for the show.

“They were hoping to keep things under wraps but Lance Bass spilled the beans!” the source said. “There goes his invite to the wedding.”

“It does not have anything to do with me, I promise!” Bass told PEOPLE Now. “I think the rumor was that yes, they’re upset I was chosen to be the officiant. But no, that is not the case at all.”

“Jax, he’s a funny guy, he can be a little hot head sometimes, and he reacts very quickly,” Bass said of the reality star. “But what I love about that group is, they’ve been what, eight, nine seasons now? They love each other, they hate each other, they fight, then they become best friends again. But they always come back together again like a family, and I think that is incredible.”

Cartwright and Taylor’s wedding at the Kentucky Castle was attended by nearly all of their costars, as well as Bass, Southern Charm’s Shep Rose and Summer House alumni Lauren Wirkus and Stephen McGee.

Lisa Vanderpump was originally asked to officiate the wedding but was unable to due to her mother’s sudden death, so the couple called in Bass as a last minute replacement.

However, Vanderpump pulled off the ultimate surprise for  Cartwright and Taylor ahead of their special day. “Lisa and [husband] Ken made it to the wedding and surprised Jax and Brittany,” their rep told PEOPLE. “They were ecstatic and so touched. It was emotional.”