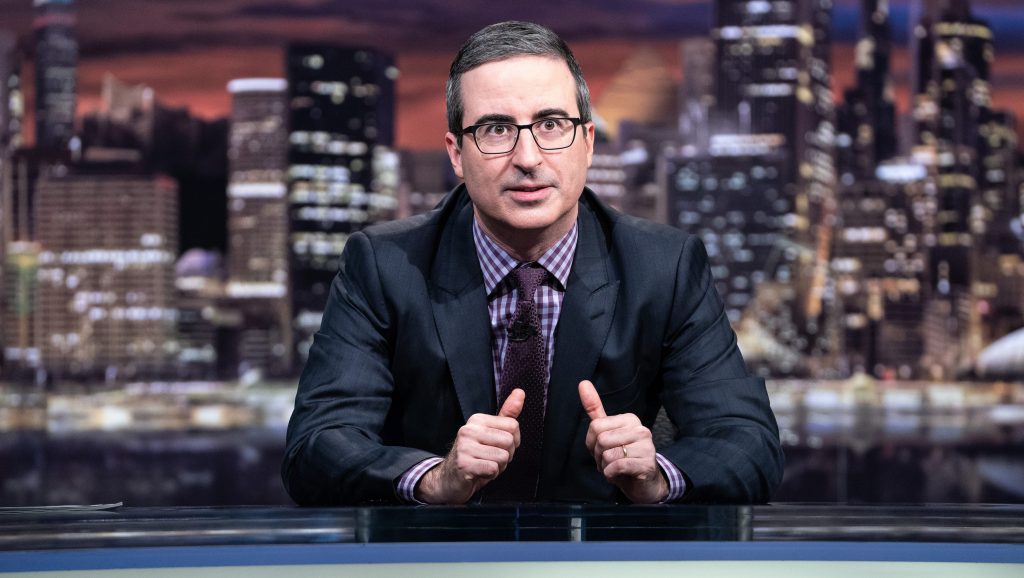 John Oliver kicked off Sunday night’s episode of Last Week Tonight taking us on the ongoing saga that is the Donald Trump presidency before digging into Jared Kushner’s Middle East peace plan.

Oliver talked about Trump’s “big week in diplomacy” as he visited with various authoritarians around the world. He joked about election meddling with Vladimir Putin, met up with his “friend” Prince Mohammed bin Salman and crossed the DMZ to North Korea to meet with Kim Jong Un and was thrilled he was invited over.

A clip was played of Trump saying he was thrilled that they asked him to step over the line of the DMZ. Oliver chimed in: That’s actually nice — Trump wanted to step over the line, was ready to do it, but waited until he received affirmative consent what a refreshing change of pace of him.”

He added, “Maybe Trump’s mantra going forward should be ‘treat women with the same respect you treat murderous autocrats!’”

Oliver then shifted to Jared Kushner’s Mideast peace plan and how Trump has been hyping it up even before he took office. This week, Kushner, announced his “Peace to Prosperity” plan during a conference in Bahrain.

He cut to a clip with Kushner speaking but with a voice that sounded like Gilbert Godfrey. Oliver then pointed out that his plan is not really a plan but “a vision that fits somewhere between an economic wish list and a half-remembered rich boy wet dream.”

Oliver continued, “Essentially he describes hypothetical investments in Palestine and its neighbors worth more than $50 billion once peace is achieved — but achieving peace is the really important part. Without that, you got nothing.” He also punted that Kushner said that he was announcing the “peace” part later this year, but the more he talked about his vision the less he seemed to actually say. In a clip, Kushner basically said the Middle East will be better off if people “stop doing terrorism” — and Oliver had a field day with that.

It was pointed out that former U.S. ambassador to Israel Dan Kurtzer gave Kushner’s “so-called plan” a C- to which Oliver said “a C- is a trust fund’s boy’s A+”

As Oliver pointed out, no Palestinian government officials attended Kushner’s “Peace to Prosperity” workshop possibly because they don’t see Trump and Kushner as neutral mediators. Kushner’s family is so close

Oliver began to state some facts: Jared’s family is so close to Prime Minister of Israel, Benjamin Netanyahu that he stayed at their home — and actually stayed in Kushner’s bedroom. The Trump administration recognized Jeruselum as Israel’s capital and cut hundreds of millions of aid to the Palestinians. When Netanyahu found out that Trump recognized Golan Heights as part of Israel, they named a settlement after him.

Kushner’s proposal can be summed up by a Vice news story of a Palestinian olive farmer, who started a joint venture between Palestinian and Israel that was defunded by the Trump administration. It turns out that Kushner’s “Peace to Prosperity” used the farmer’s face in a brochure and their website without his knowledge. To that, he said, “Kushner is a very bad student” adding that he doesn’t know anything.