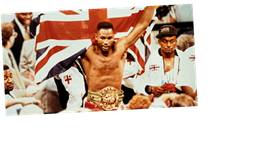 The documentary, originally titled Tough Love: The Lennox Lewis Documentary, was set to premiere at this year’s Tribeca Film Festival before the fest was cancelled due to the pandemic.

The film chronicles the childhood, rise and domination of Lewis, the last boxer to hold the undisputed heavyweight title. Narrated by Dr. Dre, it features interviews with the fighter’s toughest opponents, including Mike Tyson and Evander Holyfield.

We spoke to Lewis about the film earlier this year and debuted the film’s first trailer.

The deal was negotiated by Seth Needle, SVP of Global Acquisitions and Co-Productions at Screen Media, and J.D. Beaufils, President of Sales at VMI Worldwide, on behalf of the filmmakers. VMI reps sales.

“Lennox Lewis was one of the era’s greatest boxing champions, so I am honored to bring his story to an international audience,” said director and producer Lazes. “Lennox overcame many obstacles on his road to the top. He grew up in London during the Brixton riots, but when he moved to Canada it was the local policeman that taught him how to box. We’ve combed through hundreds of hours of archival video of some of the greatest boxing matches of all time and combined them with dozens of new interviews with boxing greats.”