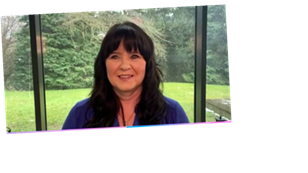 Loose Women fans were quick to point out that Coleen Nolan had adapted her background after last weeks blunder.

Eagle-eyed viewers of the show spied that the former songstress and panel member was now sat in front of two large doors over-looking her garden rather than her usual kitchen.

Previously, Ruth Langsford had to bring the show to halt after she'd been undated with requests for Coleen to shut her kitchen draw that was visably open in the background.

After tuning in for today's programme, it didn't go unnoticed that the TV star had amended her surroundings.

One online user took to Twitter and vented: "#loosewomen please don't tell me Coleen has changed her spot because a stupid woman commented on her kitchen.

"I love her kitchen it"s beautiful."

While a second penned: "Coleen has changed her background."

Although some fans seemed to be annoyed at the change, others embraced the setting as it provided a glimpse of snow that had settled in her garden.

"It's snowing again outside Coleen #LooseWomen," asked one observant person.

Coleen's kitchen became a talking point last week after she had failed to close a kitchen cupboard behind her that "annoyed" viewers.

Bringing the show to a stop, Ruth said: "Also can I just add Coleen, we're getting messages coming in.

"You know how everybody always comments about how lovely and neat your kitchen is, it always looks gorgeous.

"Well people are a little disturbed today because there's a drawer behind you that’s not closed and it’s ruining the lining."

She went on: "Can you please close the drawer because then people will stop messaging me complaining about it."

A furious Coleen reluctantly got up from her perch but fumed: "Oh my god, we have been in lockdown too long."

The panel that included Ruth Langsford, Janet Street-Porter and Brenda Edwards all fell about laughing.

Before Janet jumped in to loudly joke: "Shut that drawer."