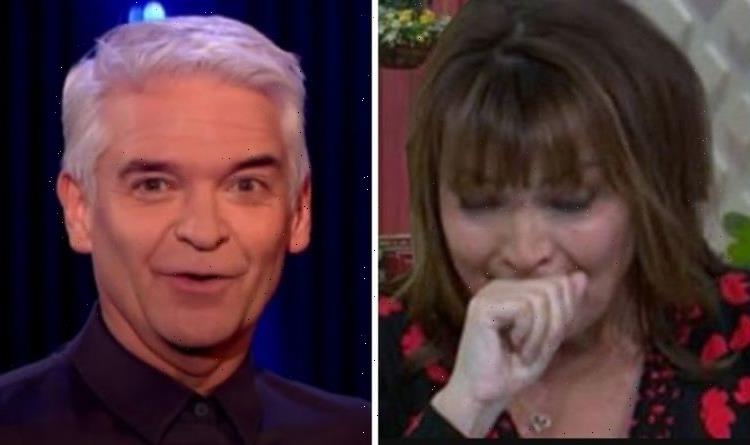 The Cube: Phil urges Lorraine Kelly to 'calm down'

ITV’s Lorraine Kelly joined colleague Phillip Scholfield on the hit game show, which she appeared on as a contestant with her daughter, Rosie. The two ended up using eight of their lives on the first task as they became flustered while trying to beat the Cube. Viewers watching from home soon took to social media to slam the pair for “talking” and being too “slow” under the strict time constraint.

The first task saw the mother and daughter face a wall with two square holes, in which they had to pass several cubes to one another and place them back on the respective tables.

The presenter and her daughter struggled though and ended up whittling down their lives on the one task.

In the first couple of attempts, they wasted some time figuring out which of the holes to use for each cube.

Before stepping into the Cube, Lorraine commented: “Yikes.”

“Don’t worry,” Phillip assured her. “It will all be fine… we hope.”

“Don’t panic, you’ll be okay, calm down for a minute!”

The 62-year-old took some deep breaths and Phil offered some advice to the nervous pair.

“There was one fundamental error there,” he said. “You’re both posting through the same hole.

“You were crashing them into each other.”

After deciding on which holes to use, Lorraine and Rosie tried again.

However, they kept using their all-important lives, even after simplifying the task.

Instead of 10 seconds, the Cube gave them an extra two seconds to complete the task, but they soon lost more lives, with only two remaining.

The Cube fans were quick to decide where the two were going wrong and took to social media to question their tactics.

As they took on the challenge, Lorraine kept asking Rosie if she was okay, and how she was doing.

Many deemed this as the reason they couldn’t get through the task.

@dannybfmv penned: “I can’t watch these tests much longer! Why are they moving so slow? #theCUBE.”

“I’m actually dying watching #TheCube, Lorraine needs to stop talking then they might have a chance,” Georgina Simmons shared.

Angel Telford later remarked: “Who’d have thought, it only took Lorraine to stop talking in order to beat that first level #theCUBE.” (sic)

Luckily, Lorraine and Rosie went on to win £10,000 for their chosen charity, which supports people with MS.

The Cube is available to watch on ITV Hub.