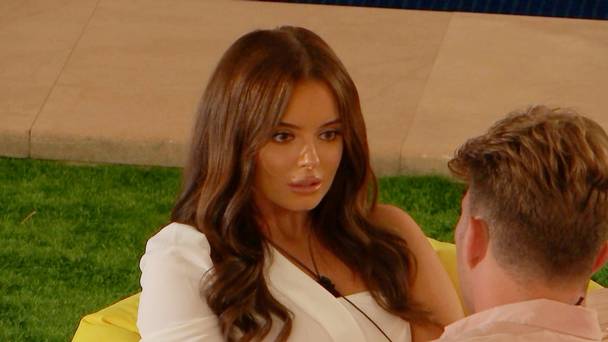 Man’s being a muppet… Between the impromptu ditching of their partner after finding themselves in the bottom three couples as voted by the public, plus assuming India wants ANYTHING to do with him, there is a fierce bang of Curtis circa Casa Amor off Jordan of late. Nevermind breaking brand new girlfriend Anna’s heart – has Jordan even considered Ovie in all this?!?

Then we had to endure watching Jordan attempting to relieve Ovie of his partner – again. In addition, Jordan seems keen on keeping the spirit of ‘he who shall not be named’ alive with his blatant gaslighting of Anna, claiming she was “shouting” when she wasn’t, yet had every right to – considering he’s pretty much blanked her since marching her around the Villa to all their memorable spots.

Given Curtis had been through pretty much exactly the same thing, Jordan targeted him for some “advice” regarding his new self-inflicted predicament. Squirrelled away in the corner, he said “Since India has come into the villa, we get on really well. Obviously, she’s a good-looking girl. It’s definitely something I’m going to process in my head and decide what to do in due course.”

Having slept on it, Jordan still thought it was a good idea, confirming to Curtis the following morning “I think I’ve confirmed the location of my head… India.” I’d wager it’s somewhere closer to Uranus, fella.

Curtis, unable to keep this nugget to himself, became the human equivalent of a pressure cooker. Instead of emitting a high-pitched sound himself (on account of him being too manly), he instead told Maura who went on the boil for him. What did he think was going to happen? That Maura would quietly simmer away for all eternity? No f***kin’ WAAAAYAAAH!

To be fair, she was up and over to Anna like lightening, who in turn barrelled over to Jordan who was mid-smarm with an unwitting India.

Then it PROPER kicked off. In short, Anna owned him (among the truth bombs, we had “You only asked me to be your girlfriend to get to the finals, you’re a game player… no wonder you’ve only had one relationship and &@*$ed over 100 girls”), and was supported by all the women in the Villa. Meanwhile, Ovie was his usual gentlemanly self and quietly extracted India from the situation. What a king.

MAURA FINALLY GETS HER TIME IN THE HIDEAWAY

Hey, imagine if Curtis said: “I’ve a confession; it was actually me who mused to Tom that infamous night ‘It’ll be interesting to see if she’s all talk.’ I also threw him a prophylactic! And then you didn’t bring him in because of it. What japes, c’mere you naaaaaaawwwghty guuuuhrrll”

Unfortunately for everyone, Curtis admitted no such thing. Instead, he cooed “I misjudged you. You’re different now that I know you. I knew there was a softer side to you.” Cheers, mate.

To complete the full 180, all he needed to do was turn to her in The Hideaway Hottub and say: “My head is not going to be turned… will you be my half-girlfriend??”

CHRIS IS STILL HANGING ON TO A HARLEY

Speaking of self-inflicted predicaments involving India; Chris was on a quest to get back into Harley’s good books after that whole ‘Sidebar of Shame’ debacle. They say the way to a man’s heart is through his stomach, so Chris clearly thought this also applies to the fairer sex.

Knowing Ovie is the king of eggs, Christ enlisted his help to cook Harley a conciliatory meal involving eggs and “smashed avocado.” When Harley rebuffed his breakfast offering, Chris tried employing the usual way to a woman’s heart – using words. Unfortunately for him, he said: “Part of the reason I want to keep this going is because you bring out a side to me that I don’t normally show people. That to me, says that you’re special.” Cheers, mate.

• “There’s nothing I don’t love – the burping, the farting, I love it all… you have my heart until you don’t want it anymore.” So sweet. And then they had to ruin it all by tongue bumping.

• We’ve found something more balksome than the sound of Islanders kissing, and that’s the sound of Jordan sucking on a Lidl own brand calippo.

Everyone – in the UK – is busy voting for their favourite couple, which means either Chris and Harley, or Anna & Jordan are going home. Or maybe it’ll be Anton and Belle…