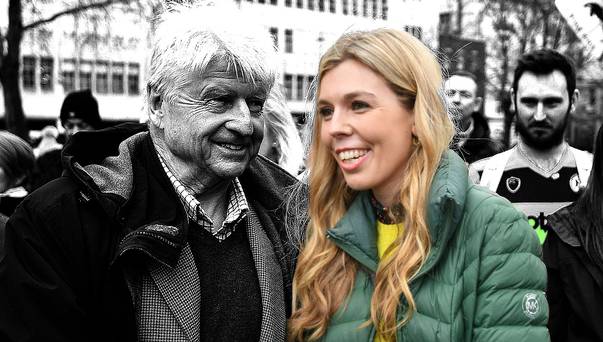 As political tropes go, the stoic, devoted impeccable First Wife is right up there with the private jet, the sharp suit, the cavalcade and the fleet of bodyguards. The First Girlfriend? Not so much.

Still, with Boris Johnson now officially moving into Downing Street this week, it will be interesting to see how life is going to look for Carrie Symonds, his 31-year-old girlfriend. Carrie, a former communications director for the Conservatives, met Boris in 2011 when, at 22, she joined the #BackBoris2012 campaign.

There has been much talk of making Symonds his wife – the paps caught her ring shopping in Notting Hill, handily enough, although it won’t be happening anytime soon, as Boris is still legally married to lawyer Marina Wheeler. After rumours of his cheating surfaced in their 25-year-marriage, Boris left the mum-of-four last year.

Already, and given the proverbial dust that’s been kicked up of late, it’s been mooted that the First Girlfriend won’t be on his arm as he makes his first speech as Prime Minister and walks through the world’s most famous black door, preferring instead to keep a low profile. Certainly, she was nowhere to be seen when Boris officially became PM yesterday, because she allegedly didn’t want to overshadow his big moment (which is interesting, because it would take an entity of heroic proportions to overshadow BoJo).

Some might say it’s perhaps for the best, after a domestic incident in June between the couple nearly put paid to his long-held dream of bagging the top job. The two have clearly put that behind them, as they’ve just reportedly bought a €1.5 million mansion in South London together.

The big question of course, is whether Carrie will keep a low profile moving forward. A popular fixture in Westminster’s corridors of power, Carrie has no shortage of ambition herself, and as a PR guru (her father is one of the founders of The Independent) should be well able to manage the media scrutiny. She is decidedly younger than many of the plus-ones of former PMs. Cherie Blair was 41 when she moved into 10 Downing Street, while Sarah Jane Brown was 44, and Norma Major 48. In the year 2019, no one seems particularly outraged or scandalised by Johnson having a much younger girlfriend.

The smart money says that for this particular glossy blonde, style icon status is very much hers for the taking, if that is indeed her wont. But given her own career background, it’s likely that Carrie will be able to parlay her current situation into an even more lucrative political or PR gig. If she and Johnson last the distance, there’s the outside possibility that Carrie could be the first woman since Cherie Blair to have a child while her PM partner is in office.

As the first official First Girlfriend, Carrie will make up half of the first unmarried couple to live together in Number 10 (unless you count Hugh Grant’s fictitious PM in Love Actually). Royal protocol looks set to get a mighty gust of wind blown through it – Prime Ministers and their wives traditionally visit the Queen in Balmoral each September, but royal protocol states that unmarried couples who are guests of the Queen don’t stay overnight.

There have of course been First Mistresses; women who definitely didn’t have a snowball’s chance of a jolly in Balmoral.

David Lloyd George, the last Liberal PM, was famed for having multiple girlfriends on the quiet. Although not that quiet, it would seem: legend has it that when a BBC reporter was dispatched to interview him in a London hotel room after the 1935 election, there lay a naked woman on either side of him in bed.

In 1943, aged 80, Lloyd George married his second wife and secretary, Frances Stevenson, after having an affair with her for over 30 years.

Former PM Lord Palmerston reportedly died mid-coitus at the age of 80, seducing a maid on the billiards table of his wife’s stately home in Hertfordshire.

Queen or otherwise, there may be no precedent to look to for Carrie and Boris, but at least they can take notes from a few leaders’ girlfriends (and boyfriends) around the world.

Closer to home, the First Boyfriend Matt Barrett is an occasional presence at An Taoiseach Leo Varadkar’s work-related functions.

Earlier this year, the doctor accompanied Varadkar to a breakfast with US Vice-President Mike Pence, and his wife Karen, as well as the Chicago St Patrick’s Day parade. They’ve been spotted out on less official engagements, too, from Kylie and Spice Girls gigs to the Dancing With The Stars final. Matt is a sporadic presence at his partner’s side when it comes to public appearances, mainly because he is fully committed to his own work as a top cardiologist at the Beacon Hospital, Dublin (last year, he moved home after working for a fellowship in a Chicago hospital).

Yet in interviews, the Taoiseach has praised the doctor for providing stability in his personal life.

“It’s great to have someone unconditionally on your side,” he is quoted as saying.

And before Leo, Bertie Ahern’s First Girlfriend Celia Larkin was faithfully by the former Taoiseach’s side for 20 years, until they split in 2003. It wasn’t quite smooth sailing for the pair – Larkin was often subjected to intense media scrutiny during Ahern’s tenure as Taoiseach. On one occasion, Larkin was whisked away from a State function in honour of Cardinal Desmond Connell, because he was known to have disapproved of the relationship. Yet people couldn’t get enough of the pair who appeared to be the epitome of Celtic Tiger glamour. Larkin, a salon owner, was the immaculately coiffed blonde who was dating the Teflon Taoiseach, a separated man. And, in post-Catholic Ireland, she stood out as a smart, steely career woman who knew her mind.

Despite never marrying (reports say she wanted to, while it was off the cards for him) Celia was involved in every aspect of Bertie’s life. Yet despite the perks – travel in the government jet, and trips to Moscow and Rio – it can’t have been easy to have such a public relationship and endure the intense media scrutiny involved.

After she split from Ahern, Larkin initially moved to Killaloe in East Clare, then, following the demise of her salon business, wrote columns for the Sunday Independent.

Yet while a few eyebrows were raised in sanctimonious pique in pre-Tiger Catholic Ireland at Bertie’s girlfriend, the French went absolutely wild when twice-divorced Nicolas Sarkozy married the impossibly glamorous Carla Bruni while he was still president of France. The couple met at a party on November 23, only a month after the president divorced his second wife Cecilia. Within three months, they were married.

His successor Francois Hollande in turn left his partner Valerie Trierwieiler for actress Julie Gavet while still in office.

Yet Bruni, a former model, singer, and lover of Mick Jagger, rose to the role of First Lady with aplomb. She was a Dior-clad staple on official state visits. On one occasion, a UK state visit was mired in controversy when a nude photograph of Bruni was published by Christie’s auction house, and later sold for €90,000.

Yet Bruni followed tradition and immersed herself in several charitable causes, from animal cruelty to HIV awareness. Quite the formidable template for Carrie to follow, in a word.