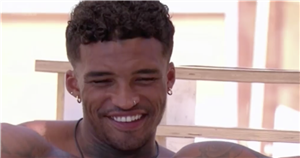 Viewers have been left cringing at Love Island, after Joanna Chimonides told mortified Michael Griffiths what their children would look like.

The keen Casa Amor girl appeared to take Michael by surprise when she spoke about if they would make it on the outside world, before she began describing how their future offspring would be.

“I was imagining what our kids would look like,” she said, leaving Michael speechless – and fans begging him to recouple with Amber. “Only because your curly hair and stuff… you just never know do you. A little girl with a Louis Vuitton backpack, it’d be really cute.”

Fans in their masses took to social media to share their shock over Joanna’s words, with one writing: “Joanna is mentioning about kids because she is trying to hold onto Michael cos she knows herself that whatever is going on with them is just dead! she will start talking about marriage next.”

“Michael and Joanna just look bare awkward. and her mentioning kids after a few days.. bare awk that,” a second wrote, while a third lashed out: “Think Michael just shit himself a bit , that was coming in a bit strong from Joanna , like you can think that but don’t tell a boy you’ve imagined your kids.”

Michael was with Amber Gill at the beginning of the season, but his head was turned by Joanna during the savage Casa Amor twist.

Speaking with Jordan on the bean bags, he says “Amber was the girl I was interested in and now my heart rate has been raised most by her. It’s not ideal.”

Michael put the results of the challenge down to him feeling awkward when Amber was delivering her performance.

However, Jordan said he felt as if the romantic connection between Michael and Amber could be stronger than his connection with Joanna.

Jordan says to Michael “I think she [Amber] is very much still into you.

“From what I’ve seen, you and Joanna don’t have as much chemistry as you and Amber did.

“If you did change your mind, there would be nothing wrong with that.”