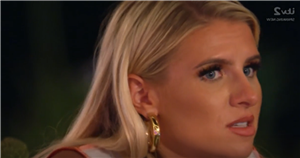 The Love Island couples had some tough decisions to make in Sunday’s episode of the hit ITV2 dating show as they were faced with deciding who among them would be placed up for eviction.

After the boys treated the girls to poolside dinner dates, the villa housemates were surprised by being made to vote on who they believe are the least compatible couples.

Each pair spoke in hushed whispers across their tables as they decided who they would be voting for.

Jake Cornish and Liberty Poole have been struggling recently as both fans and villa housemates speculated that Jake may have told Liberty he loved her in order to get out of an awkward confrontation.

Faye Winter even whispered to her partner Teddy Soares that she thinks Jake is a "showman" during last Friday's show.

As the couples debated, we got a glimpse of friends turning to enemies as Chloe Burrows said to her partner Toby Aromolaran that the “writing is on the wall” for Jake and Liberty, as she was pushing for them to vote for the pair.

Meanwhile, Faye was seen saying to Teddy: “Did he make Liberty his girlfriend because he wanted to be the first person in here to make someone his girlfriend?”

Faye and Teddy also found their relationship being questioned as many of their housemates declared them as the least compatible.

Many viewers watching at home disagreed though and some fans even took to Twitter to share their outrage when Millie Court and Liam Reardon were seen debating a vote for Faye and Teddy.

One wrote: “how can millie say faye and teddy aren’t compatible but she was right by faye’s side encouraging her to reconcile with teddy? #loveisland.”

Another said: “Salty because Millie NEVER said anything to Faye when she was in the wrong/s******g all over Teddy, but now she wants to say something? It’s giving me hypocrite [thoughts] woops #loveisland.”

A third Tweeted: “Liam and Millie are the biggest game player, Millie really shocked me she’s so fake acting all friendly with Faye and voted for her as a least compatible!!! Sis wants the money #loveisland.”

Priya Gopaldas and Brett Staniland also found themselves receiving votes, after the medical student admitted to the girls that she was finding their dinner ate "boring" just before voting took place.

Finally, Mary and Aaron – one of the newest couples in the villa – were also labelled least compatible.

Viewers were then asked to decide which of the four couples is their favourite, with the results expected to be revealed tonight.

For the latest Love Island news, sign up to OK!'s daily newsletter. Love Island airs weeknights at 9pm on ITV2.