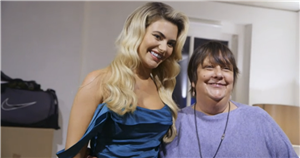 Love Island star Megan Barton Hanson has opened up about her cosmetic procedures during an empowering episode of Kathy Burke’s All Woman on Channel 4 – where she confirmed she had her first boob job while her mum was getting hers.

The 25 year old reality star, who previously dated fellow islander Wes Nelson, appeared on the show to discuss her need for surgery after spending around £40,000 on procedures over the years.

On the show, she was asked exactly what procedures she had done and why she decided to go down that route, after viewers were shown a photograph of her pre-surgery.

She responded: “So, the first thing I had done was my ears – kids were nasty, and would call me a rat or be like, oh your ears stick out… then my nose, and my boobs.

“My mum was having hers done, so I was like – would you pay for me to have my boobs done? I promise I’ll pay you back!

“When I started stripping, I got a second boob job because I thought I’d treat myself, I work hard and I’ll get the natural looking boobs I’ve always wanted.

“Then my lips, then I got veneers, and that’s it. I got so much stick for it on the island – I didn’t think there would be that much stick."

She continued: “They would say I was really fake and plastic, and I was even getting death threats at one point. I think people just love to hate.

"On social media it’s such a big thing like, how you look. My biggest thing is, I just don’t want girls to have unrealistic expectations like I did. It changes the outside shell, but you still have the insecurities. Chucking money at it isn’t going to fix that.”

Megan is currently starring in Celebs Go Dating, and only recently came out as bisexual.

She recently discussed the reason she waited to come out until after she appeared on the ITV2 match-making show.

“The girls were stunning in there, I’ve never been in somewhere where there were half-naked people as good looking as that.

“It was sweet. But I didn’t have a connection with them like that.”

Megan is rumoured to be dating TOWIE star Demi Sims, after both girls appeared on the popular E4 show.

At the finale party, both Megan and Demi appeared to ditch their own dates – and were spotted sharing a steamy smooch in front of a crowd of hundreds.