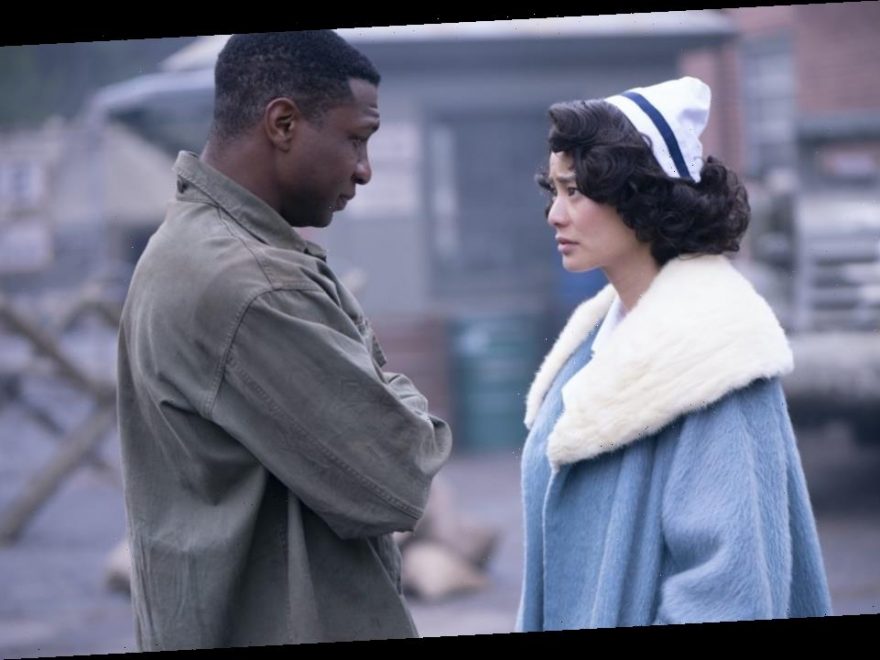 Jonathan Majors’ character, Atticus ‘Tic’ Freeman, has seen his fair share of monsters on this season of HBO’s new horror series, Lovecraft Country. But in Episode 6, he finds himself entangled in a terrifying situation with his first love, Ji-Ah — played by Jamie Chung. In a recent interview, Majors revealed how they filmed that thrilling tentacle sex scene.

What happened in episode 6 of ‘Lovecraft Country’?

In the first five episodes of Lovecraft Country, fans watched Atticus face the Sons of Adam with his dad Montrose (Michael K. Williams), uncle George (Courtney B. Vance), and new lady love, Leti (Journee Smollet).  But episode 6 takes viewers back in time, to when he met his first love while serving in the Korean War.

Ji-Ah is introduced as a Kumiho, a mysterious spirit who has taken over the body of the daughter of a widow who summoned it to kill her rapist husband. In order for the Kumiho to leave Ji-Ah’s body, it must consume the souls of 100 men.

By the time viewers catch up with Ji-Ah, she has reluctantly claimed her 98th and 99th victims. And after seeing Tic kill her best friend, she decides he will be her final soul.

But after spending time with Tic, she falls in love with him. The two romance for months. But on one winter afternoon, when the two are having sex, Ji-Ah’s tentacles come out, and they penetrate Tic until she sees his death in the future.

When her tentacle recedes, Tic is horrified. After pleading with Tic to understand she’s a Kumiho, Ji-Ah warns him about his death and begs him not to go back to America.

Earlier this season on Lovecraft Country, Tic called Ji-Ah in Korea, and later saw her in a magical delusion cast by Christina Braithwhite (Abbey Lee). In a recent interview with Collider, Majors talked about how episode 6 explains Tic’s connection to Ji-Ah and her prophecy.

We’re made out to be an enemy in our own home.

“He’s carrying that love with him still, and therefore is carrying that sense of dread with him, as well,” said Majors. “And then, when I get to Chicago, and all these things begin, it’s almost as if, as Othello says, ocular proof, you know?

“He sees it, renditions of what it is she’s mentioned,” he added. “Her being a Kumiho. Him seeing a shoggoth. Him dealing with the Sons of Adam… And so, the manifestation of all these things, he takes extremely seriously — and is trying not to until the code is broken.”

In his chat with Collider, Majors addressed the tentacle sex scene between Tic and Ji-Ah. While most of it was CGI, the Lovecraft Country star revealed that they were actually tethered to real prop tentacles.

“At one point, I’m literally holding these green tentacles, and Jamie is struggling with them, and we’re anchoring each other,” explained Majors. “And then she’s holding onto my arms — and Jamie’s a very, a petite lady, and I’m not necessarily a petite fellow — so she’s holding onto me, and pulling like mad.”

He noted that they would have to wrestle with the tentacles while filming the scene, and would fall back when it cut. But when the cameras started rolling, they fell right back into the tussle.

“It was fun,” Majors added. “It’s really the most ridiculous and artful thing you can do, you know, because it’s so serious, right, because you’re dealing with bodies, and emotions, and all these things. And then you’re adding this element of, like, ‘Now there’s tentacles!’”