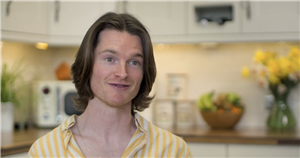 Married At First Sight 2021 is already a huge hit with fans who have hailed Channel 4 producers for introducing the first same sex couple on the programme.

Twitter went wild with positive feedback as newbie Daniel entered to join the girls for fizz in the swanky restaurant as they got ready to find love.

Some even added that the show's creators had done a better job than ITV's Love Island, especially when it came to diversity.

"Love the fact they are doing a same sex match!" chimed one person.

"Already love that they have put a homosexual couple in. Daniel is already one of my favourites," added another.

A third penned: "Actually so happy MAFS UK will have a gay couple this series. Kinda wish there was more than one!"

While a fifth said: "We are getting a gay couple on MAFS UK. This is already better than Love Island in terms of diversity."

Singletons Matt and Daniel, became one of the eight pairs to sign up for the experimental romance.

During the first episode, the duo were separated – Matt entering with the grooms-to-be and Daniel joining all of the brides.

In the intro, Matt from West Yorkshire explained that he was hoping to meet a man who he could start a family with.

Meanwhile Daniel ,27, who is in sales, added: "It's amazing to be one half of the first gay couple.

"Gay marriage has only been legalised very recently in Northern Ireland, which is absolutely shocking.

"And, now that I can share my relationship with the world, I find that so important."