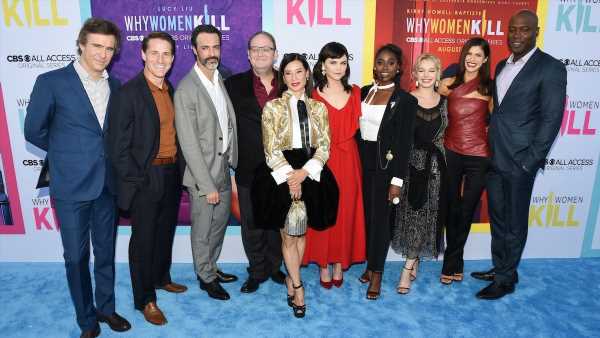 Lucy Liu plays the older woman starting a dalliance with the young man-around-the-house, albeit for a different reason than did Eva Longoria’s Gabrielle Solis back on ABC.

Marc explained to Monsters & Critics at the Television Critics Association (TCA) convention in Beverly Hills, Why Women Kill allows him to go so much further. He truly crafted a series that captures his uniquely comic voice.

Why Women Kill features three separate — or are they? — storylines taking place in the same Pasadena, CA manse (with actual exteriors shot on Fremont Place in Los Angeles), in three different time periods, all leading up to some crime(s).

In 1963, Ginnifer Goodwin is loyal housewife Beth Ann Stanton. She discovers her aerospace engineer husband Robert (Sam Jaeger) is having an affair with a diner waitress (Sadie Calvano).

In 1984, the hilariously biting Liu is socialite Simone Grove. She discovers her husband Karl’s (Jack Davenport) affair(s) with another man.

In 2019, Kirby Howell-Baptiste and Reid Scott are Taylor Harding and Eli Cohen, a lawyer and a screenwriter respectively, in an open marriage. Their lives become complicated when they both begin lusting for the same woman, Jade (Alexandria Daddario.)

Interiors of the series are shot on three separate soundstages on the CBS lot in Studio City, CA, each with the same basic bones but decorated to reflect their respective periods.

“I thought it would be really cheap, you know, same set and we just redress it,” Cherry admits about his original plan to use the same basic set structure. “But [production said] No, redressing this thing would take too much time.”

As Cherry warned, viewers shouldn’t take the series’ title too literally. None of these stories is guaranteed to have a murder committed by its heroine, and the victim(s) may not be who we expect.

Furthermore, a house is not all these women have in common. Their storylines will converge in season 1’s tenth and final episode.

Being that this is CBS’ streaming service All Access, and not a network like Desperate Housewives’ ABC, we can expect the stories to get more explicit than before.

Cherry reveals that ABC once nixed an abortion storyline for a new character on Desperate Housewives, but CBS All Access has no such limits.

On Why Women Kill, Lucy Liu drops f-bombs with aplomb — scenes which Cherry enjoys crafting, but embarrasses him a little.

“I feel like such a child,” he admits. “I actually told the writers, ‘You all have to run roughshod over me if I keep doing this too much. But now in some of my best punchlines I finally get to have the word I should have there.”

As many TV writer/creators have found, streaming offers another freedom — the freedom not to make as much of your show as a network would demand. While overseeing 180 episodes of Desperate Housewives, with twentysomething episodes per season, Cherry remembers:

“The thing that I went through that was so difficult was cliffhangers. Okay, I’ve got to do a cliffhanger every year, and their lives have to change completely. And oh God, that’s so hard!”

But now, crafting a season comprised of just 10 episodes “seems like a much more manageable prospect. It’s great because you can figure out where you’re writing to, and then just work backward. This has been the nicest, most wonderful experience of my career.”

As season 1 continues to air, one episode each Thursday, Cherry has his eye on a potential second season. He said he’s inspired in one way by another preeminent showrunner, Ryan Murphy, and his approach to American Horror Story.