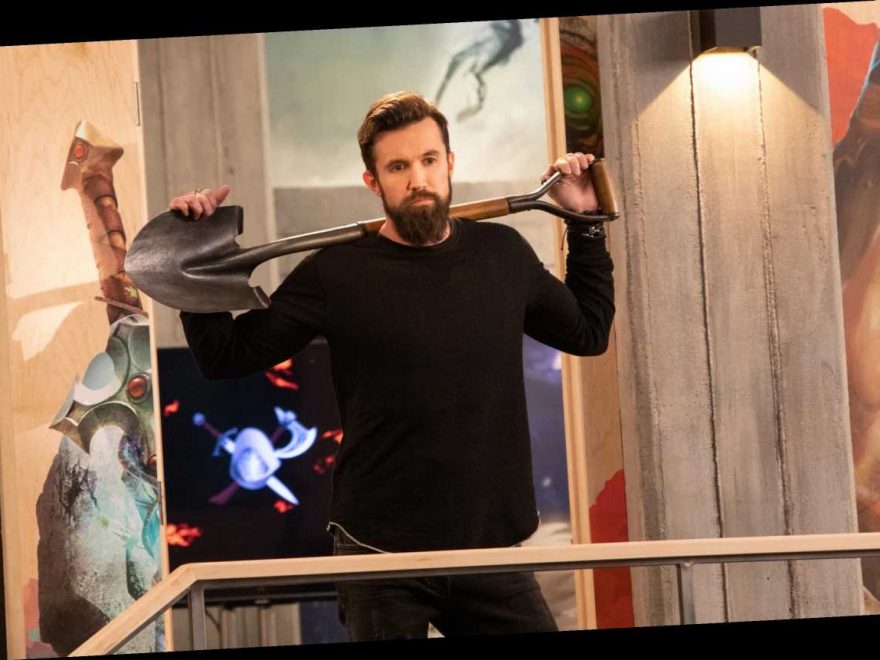 For most of its 14 seasons and counting, It’s Always Sunny in Philadelphia has been a comedy that out-Seinfelds Seinfeld in its aversion to hugging and learning. The humor still works after all this time precisely because the Gang rarely grows or changes in any tangible way. But every now and then — Dennis realizing he needs to leave town, or Mac performing an interpretive dance for his homophobic father — Sunny will offer a moment of catharsis so strong, you wonder how the creative team might do with more consistently sincere material.

The new Apple comedy Mythic Quest: Raven’s Banquet, created by Sunny scribes Rob McElhenney, Charlie Day, and Megan Ganz, begins to answer that question. Set behind the scenes of a popular online video game in the mode of World of Warcraft, it stars McElhenney himself as Ian, the game’s creative director, whose rampant narcissism and disregard for the input or feelings of others agitates the hell out of chief engineer Poppy (Charlotte Nicdao) and project manager David (David Hornsby, another Sunny vet). There’s also F. Murray Abraham as grandiose head writer CW, a washed-up sci-fi novelist who’s never actually played the game; Danny Pudi as Brad, the smug head of monetization; Jesse Ennis as David’s unstable assistant Jo, who acts like she’s Ian’s assistant; and Ashly Burch and Imani Hakim as Rachel and Dana, who play the game all day, testing out new additions for the company.

It’s a much more straightforward workplace comedy than Sunny, with various ongoing rivalries and alliances, petty beefs, and silly crises. Poppy is right about almost everything, for instance, and always ignored by Ian (though he pays her slightly more mind than he does David), while the team remains desperate to curry favor with Pootie Shoe (Elisha Hennig from The Sinner), an obnoxious 14-year-old streamer with over 10 million followers. Like most new comedies — including Sunny waaaaaaaay back in the day — there’s a lot of trial and error in terms of who these characters are, what makes them tick, and which performer combinations work best.

As a result, the humor is uneven in the early going. There’s a very funny episode (the third) where the game is overrun by Nazi players and nobody can agree on how to handle the problem — or even if it’s a problem — and a great subplot in the next one where a group called Girls Can Code tours the office and discovers just how marginalized women are in the world of gaming. (The social commentary in both stories is, not coincidentally, the Sunny-est the new show feels.) But there are also long stretches where this group of very funny and well-cast performers are just running around frantically and yelling at each other.

The more interesting part of Mythic Quest comes when it’s not even trying for laughs. We’re meant to take Poppy’s exasperation with Ian seriously — fuel for jokes, but also a reason to sympathize with her as she wonders how much longer she can work for this guy. (As a side benefit, conflicts like that, or romantic tension between Dana and Rachel, make the show more watchable when the humor’s not quite landing than if all the characters were ridiculous sociopaths like the Gang.) And things can grow wholly earnest at times. We eventually get more backstory on why Ian is so insufferable, and the wonderful fifth episode is a dramatic short story starring Jake Johnson and Cristin Miliotti as a couple trying to launch their own game in the Nineties. That episode, called “Dark Quiet Death,” is so good, and Johnson and Miliotti so winning, that I began to wish this was the actual show, rather than a brief detour(*).

(*) This is not the first time Miliotti has proven too good for what’s meant to be a minor role. See also the final How I Met Your Mother season.

“Dark Quiet Death” can be watched in isolation, though it eventually explains what it has to do with the main story, and why we’re seeing it in the midst of all the lunacy between Ian and the others. And it’s so rich and fully thought-through, it almost feels like the show McElhenney and the others really wanted to make, before opting to first do something a bit closer to their usual brand. If so, watch out for when they finally play things entirely straight. In the meantime, there’s enough in Mythic Quest to suggest this group has comic life beyond Paddy’s Pub.