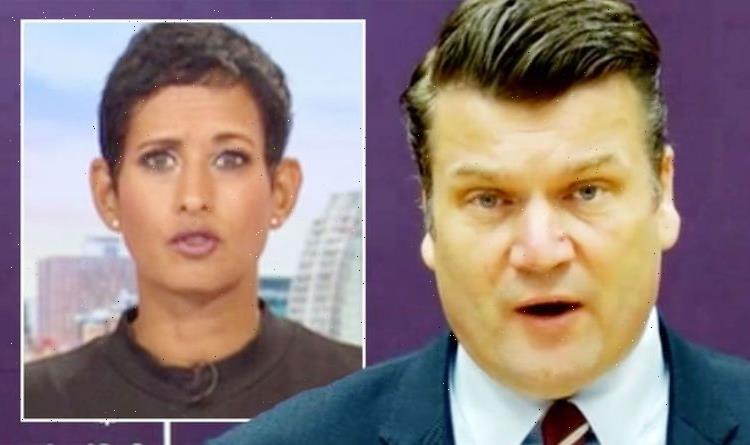 Kabul: Heappey says he 'can't advise' on a safe area

With the August 31 deadline to withdraw people from Afghanistan edging ever closer, Naga Munchetty and Charlie Stayt were joined by the Minister of the Armed Forces, James Heappey, to discuss the latest developments from Kabul. Following fresh warnings that Kabul Airport could be the target of an “imminent threat” from the likes of ISIS, Heappey was grilled for an explanation by Munchetty who sought detailed answers following the warning. However, given the nature of the questioning, Heappey was quick to shut her down.

“What details can you give, if any, of this imminent threat?” Munchetty probed right away as the interview kicked off.

Heappey replied: “I cannot share with you the exact detail of what the threat is, but I can say over the course of the week the credibility of the reporting has reached the stage where we believe that there is a very imminent, fairly lethal attack possible in Kabul,

“And as a consequence, we’ve had to change the travel advice to advise people not to come to the airport, to find a place of safety, and await further instructions.”

“Do you have a timeline?” Munchetty asked to which Heappey said no before the BBC host continued to probe: “Where is safe then?

“If the airport isn’t safe then where is safe for those people who are waiting to leave the country?”

“That is a concern because crowds are still very large and that reflects the desperation I think people have.

“And I think people think not coming to the airport with the August 31 deadline the deadline we’re still working to, you know, this isn’t just a case of pausing and dealing with the threat and pick up where we left off.

“The reality is the clock continues to tick even when we’re giving the advice that we’re giving and asking people to stay away, but we know how desperate people’s circumstances are.

“We would not be sharing the intelligence or threat that we know of if we didn’t think it was credible, imminent and lethal.”

But Munchetty seemed keen for specifics as she repeated: “I understand that but where is safe then?

“If there are people in Kabul who would’ve made their way to the airport to past certain checkpoints – where physically do they go now?”

Heappey promptly shut Munchetty down, replying: “Well, I can’t advise them to go to any one place.

“In fact, you might see that to do so would be to advertise to the Islamic State that there is another place that we’re asking eligible people to go and concentrate and than that itself becomes a target.”

Following Munchetty’s line of questioning, it wasn’t just the Armed Forces Minister who appeared less than impressed with the details she was asking for.

Taking to Twitter, one BBC viewer fumed: “@BBCBreakfast Naga ….. your questioning is nothing short of unreasonable…. Oh yeah completely stupid as well in basic terms!!!

“Let’s give all the Information out on public television …. Don’t believe you would be employed by the security services at any point soon!!!” they added.

A second echoed: “Naga on trying to get the armed forces minister to give out information that Islamic state could use to mount an attack ffs.” (Sic)

While a third said: “#bbcbreakfast wow naga is desperate to expose the vulnerable in kabul by cornering this bloke into divulging sensitive info.”

“@BBCBreakfast I cannot believe the ridiculous questions naga is asking the defence guy at 7.40 – a threat is just that – it needs addressing and it’s out of the govt powers. Why ask questions that can’t be answered – she is aggressive – it is so unnecessary,” commented a fourth.