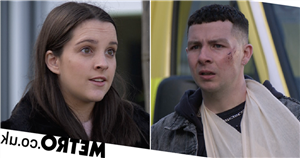 Jacob Hay (Jack James Ryan) finds himself on the receiving end of a warning from Amy Barlow (Elle Mulvaney) in Coronation Street next week, as he makes his highly-anticipated return to the cobbles.

The young lad debuted in the ITV soap last year, making many memorable appearances as he manipulated and groomed Simon Barlow (Alex Bain) into the dark world of drug dealing.

With boss Harvey Gaskell (Will Mellor) now behind bars, however, Jacob is hellbent on starting afresh, and next Friday’s (January 15) offering of the serial drama sees him cross paths with Amy and Summer Spellman (Harriet Bibby) outside the hospital.

Jacob, sporting a sling, tells the girls that they’ve got no reason to be afraid, as he’s out of the drugs gang and is intent on turning over a new leaf.

Amy, however, reckons that he’s lying.

‘A leopard never changes it’s spots’,’ she says, as seen in the above clip taken from the episode in question, and it’s clear that such a claim hurts Jacob’s feelings.

‘He is trying,’ actor Jack James Ryan told Metro.co.uk, asserting that Jacob is determined to make up for what he’s done. ‘There’s a definitely naivety when he first comes back.

‘He always expects people to forget about the bad things he did because he has decided to change.

‘At the end of the day, Amy and Simon are cousins so she is bound to be extremely hostile to him.

‘He is struggling to see the light at the end of the tunnel, he feels rejected not to be accepted. It’s going to be a long journey.’

Coronation Street airs this scene on Friday January 15 at 7:30pm on ITV.