Richard Madeley suggested the request for a 15 percent pay rise for NHS nurses was “not going to happen”. He and Susanna Reid spoke to Mental Health Nurse Katie Sutton on Good Morning Britain today after the Queen awarded the George Cross to the public health service on its 73rd anniversary.

“So I guess you would say ‘Thanks very much for the medal, but can we have some more money please?’” Richard remarked.

Katie replied: “That’s pretty much it, yes. It feels like another empty gesture…if anything, the claps, I really appreciated the claps we’ve seen, at the end of the day, the majority of people seen clapping were the general public.

“The public showing us appreciation in that way, that’s probably the strongest away, apart from following lockdown guidance and to go and get vaccines, that’s the strongest way the public can show support for us.

“But the government has much more power to support us and they’ve got the pockets, they’ve got the purse strings, they can actually put a meaningful support in place and so far they haven’t done,” she added. 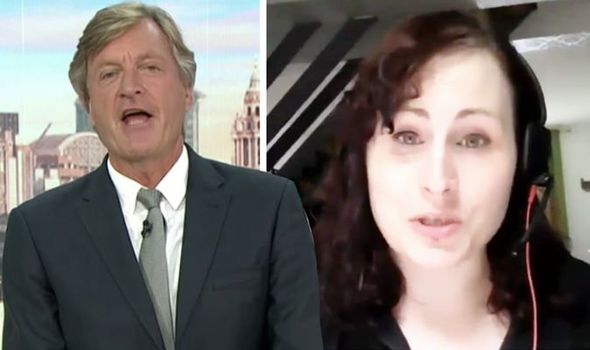 Richard continued: “You’re stuck on one percent offer at the moment, there is a review that is coming in later today, it is predicted the new Health Secretary is right behind you and you might even get 2.1 percent in the end. Will that be enough? 2.1 percent?”

“No. That’s not enough,” the nurse commented. “We’ve lost 20 percent of our pay over the last 10 years in real terms and actually, at the moment we aren’t even being offered anything, the government said we might get offered one percent.

“But right now the 2018 pay deal that we have expired on the 1 April and since then, our pay has been frozen.

“We don’t know what we will get offered, there is no offer on the table right now.”

When Katie was asked how much she would deem a respectable pay rise, she mentioned: “12-15 percent”.

But those watching at home thought the figure was ludicrous.

“The government don’t have the money for the ludicrous demands of 10-15% though. Where does she expect these funds to come from??” Someone wrote online.

A second chimed: “Katie needs to book herself in for a chat in the mirror if she thinks the Gov’t have the funds for a 10 – 15% pay rise!”