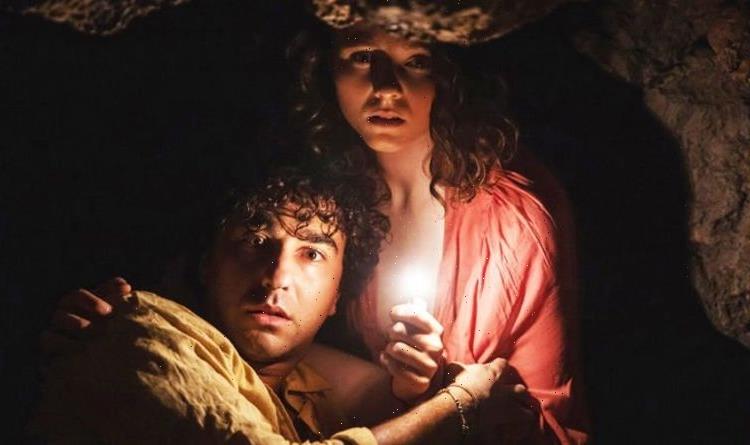 WARNING: SPOILERS FOR OLD THE MOVIE AHEAD. From the first trailer, Old the movie has intrigued moviegoers with its bizarre mystery: why are this group of holidaymakers rapidly ageing and why can’t they leave the beach? Based on the graphic novel Sandcastle, M Night Shyamalan delivered his own twist ending to the story.

As Old’s eclectic cast of characters discover that the beach is ageing them, they soon realise they’ve been tricked into going there.

The staff at the resort had recommended they try out the exclusive sandy area and the unsuspecting guests were delivered there in a minibus driven by an employee played by Shyamalan himself, in an extended cameo.

On the beach, they spot a camera filming them high up in the hills and it later becomes apparent that it’s the driver.

While the trapped holiday-makers find that they keep blacking out whenever they try to leave and experience pressure on their heads like they’ve been deep underwater.

The group soon realise this was because it was too much for their bodies to move from one area where time flows differently to another.

Kids Trent and Maddox, played as teenagers by Alex Wolff and Thomasin McKenzie, soon discover a notebook revealing the area to be a unique phenomenon.

As the morning comes, both are now in their fifties and the only members of the group still left alive.

Realising what precious time they have left and the need to find an escape, the pair give in to their childish impulses and prioritise building sandcastles first.

Of course, we can easily dismiss this as foolish given their grave situation.

But considering the story’s overall commentary on our own mortality, the film seems to encourage enjoying such trivial moments and childlike wonder.

But Shyamalan doesn’t leave it there, with Trent discovering he has a cryptogram note to decipher from the kid Idlib at the hotel.

The 50-year-old Trent discovered the message reads: “My uncle doesn’t like the coral”, which some fans managed to work out when it appeared in the Old trailer back in May. But lucky for them, they didn’t understand the spoiler out of context.

Trent and Maddox looked out to sea and realised that swimming through the coral was the only way off the beach, so immediately get going.

As for Old’s twist ending, the film ends with Shyamalan’s driver at his camera post reporting back to the resort on test subjects 73 and believing that the siblings drowned.

Back at base, it’s soon revealed that a group of scientists have been dealing with a philosophical trolley problem.

The medicine company have been luring individuals to the resort with specific health issues to experiment on them.

Upon arrival, the guests were given cocktails that were actually experimental medicines to be tested on the group’s ailments at the beach as they aged rapidly.

The ethical dilemma is that by sacrificing a few, the company will save millions around the world from what they discovered in the results.

Nevertheless, Trent and Maddox managed to escape and give evidence from the notebook to the police officer on holiday they met at the beginning. The jig is up and the organisation is brought to justice.

There’s no end credits scene, but the film ends flashing back to how the siblings managed not to drown in the coral before we see them flying away in a helicopter to meet their aunt.