Plunder is a horror story that picks up with a gang of Somali pirates after they face off with an illegal Chinese vessel. They then try to board what they think is a research ship, only to find themselves in the midst of a massacre, with their worst nightmares becoming reality around them. The 14-year-old boy who went from translator to reluctant pirate becomes their key to survival, but he must decide how far he’s willing to go in the name of self-preservation. 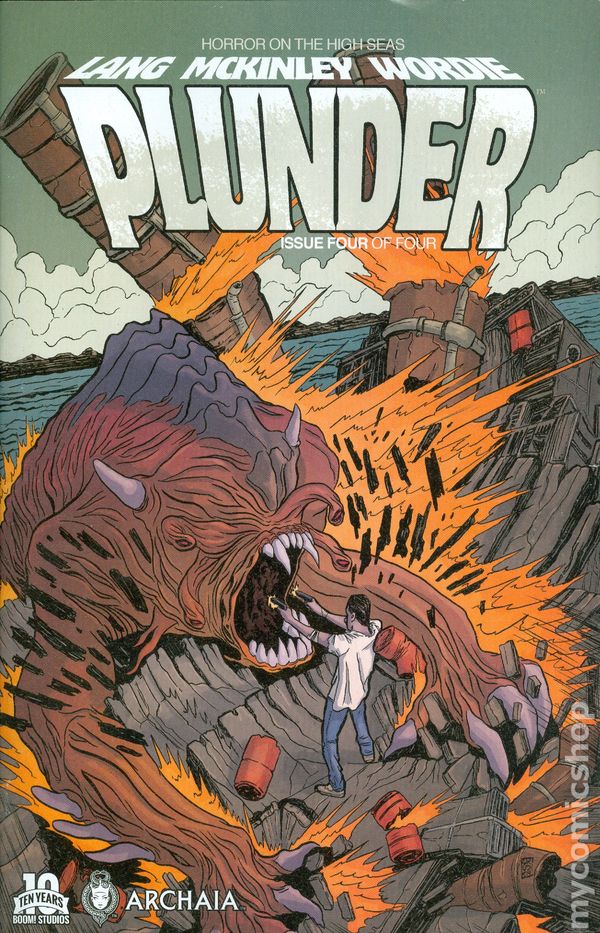 The Koulest Productions duo has tapped Ethan Teller (Jar of Fools) to pen the script, with two-time Academy Award-nominated SFX Artist Alec Gillis (Prey) and his newly formed Studio Gillis also coming aboard the project to oversee its Special Effects.

“Jonathan pitched me the plot of “Plunder” when we were introduced by a mutual friend at a Clipper game. I was immediately taken by both the concept and his sense of storytelling when describing the plot,” said Teller. “He gave me a vivid images of what the film could be and I knew that I was talking to someone with as deep a love of the genre as myself. Being able to contribute to making a feature adaptation of the comic book alongside Jonathan, Miles and Oren has been everything I could hope for.”

“Optioning Plunder has felt like a dream come true for me. Being a massive fan of Sci-fi/Fantasy stories is what made me want to be a producer in the first place,” said Miles Koules. “Working with such great people like Jonathan and Ethan on their vision which draws comparisons to a combination of Alien and Captain Phillips is incredibly inspiring for me. I feel lucky to be a part of what takes their idea to the big screen.”

“Bringing in Award winning special effects wizard Alec Gillis, who redesigned the Predator for Dan Tractenberg’s PREY, worked on creating the Aliens from Aliens and Alien 3 and so much more, as our first step in development gives this project a whole new depth,” the producer continued. “This team has the makings of something really special and I can’t wait to take our next steps and see what the future holds for Plunder.”

“PLUNDER was inspired initially by the rash of Somali piracy in the headlines, but as we dug into the origin it became a character study rooted in survival,” added Lang. “While science fiction/horror is our vehicle for storytelling, and truly genres that we love and revisit frequently, the story would not work without being emotionally grounded. Miles and Oren Koules understood this from the jump and were instrumental in helping us make the characters even more universal. They’re the perfect partners to steer the story towards the big screen and we couldn’t be happier collaborating with them.

Added the comic’s creator in closing, “It truly is a dream come true to share our nightmare with the world. The respect and passion that the Kouleses have for the source material is mind-boggling. Of course, this is a “pinch yourself” moment on a personal level, but it is greater than that. We have an opportunity to share our story on a global stage, and as a creator, you really can’t ask for anything more.”

Lang is a writer and producer of film, animation and comics who began his writing career as a film critic for the Miami New Times. His short film, The Showing, won a Van Gogh Award for directing at the 2015 Amsterdam International Film Festival. He’s otherwise known for his work on such comic book titles as Feeding Ground and IDW’s Garbage Pail Kids, and the graphic novel Meyer published by Humanoids, among other projects. Lang also serves as Partner and Chief Creative Officer at the media company, S/LANG Entertainment.

Miles Koules is a retired professional hockey player who, along with his father Oren Koules—who co-founded Evolution Entertainment and its division Twisted Pictures—announced the launch of Koulest Productions in April. The elder Koules is a well-known producer who has been behind everything from Lionsgate’s Saw franchise to CBS’ sitcom Two and a Half Men. Also in development at Koulest is the YA survival thriller Ski Weekend, adapted from the debut novel of former top international trial attorney Liani Kotcher, which she wrote under the pen name Rektok Ross.