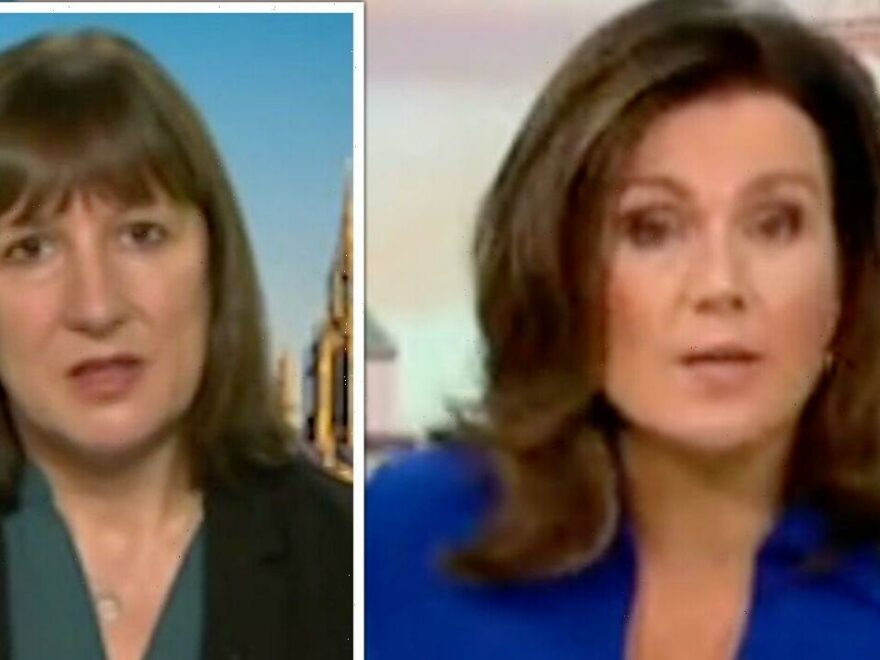 Shadow Chancellor Rachel Reeves insisted the Conservatives have now “run out of credibility and are running out of chancellors” after performing a screeching U-turn on Liz Truss’s mini-budget on Monday. New Chancellor Jeremy Hunt wiped the slate clean as he announced nearly all measures included in the fiscal plan would be scrapped after weeks of market and political uncertainty. But Good Morning Britain host Susanna Reid noted the Labour Party had also performed some significant U-turn on an income tax cut.

After Ms Reeves noted it would not be feasible for the cut to go ahead, Ms Reid said: “That’s interesting because at the time, when that was announced, Keir Starmer said you would support that.

“There were other members of your party, most significantly Andy Burnham, who said that that would not have been financially wise, to do that cut in the basic rate.

“You’re now all on the same page, are you? You wouldn’t be able to promise an income tax cut for those at the bottom.”

A stumped Ms Reeves replied: “I’ve always been very clear that the most important thing is regaining our fiscal credibility and our financial stability.

JUST IN: ‘We went too far’: Truss says sorry for her mistakes but vows to stay on as Prime Minister

“But the truth is, any combination of Conservative Prime Ministers and Chancellors – we’ve now had four Conservative Chancellors in four months – are not going to be able to provide that stability we need.

“And even after those U-turns, borrowing costs not just for Government but also for ordinary families, through mortgage rates, remain at those high levels because of the turbulence and the damage that the Tories have done to the economy.”

Ms Reid cut in: “Dare I say you’ve performed your own U-turn?”

The Labour Chancellor curtly replied: “I’ve always said the most important is securing our economic recovery.”

Truss apologises for ‘the mistakes that have been made’

@PeterAtkinson said: “Rachel Reeves was asked the same question twice about the 1p tax cut and on both occasions never answered it.

“The answer should be, ‘If Labour were the government we would be in exactly the same trouble if not worse’.”

Sturgeon’s latest dodgy dossier on IndyRef2 takes Scots for fools [INSIGHT]
Penny Mordaunt has MPs in hysterics as she says Liz Truss ‘not hiding’ [REVEAL]
Do you think an independent Scotland would thrive like Sturgeon says? [REACT]

@charlesr1971 commented: “The Labour Party complain when the Tories try to reduce the tax burden and throw a fit when they try to increase the tax burden.

“Even when the new Chancellor shines a light on just how much money is available in the Treasury, Rachel Reeves is still ranting & raving?”

@RichardSpeaks24 said: “While I understand the Labour wish to be popular and to be frank Tories are on their knees in performance terms; I do resent the constant reference by Labour to ‘working families’ when what needs action is to amend Universal Credit, peg to inflation, stop making sick people work.”

And @GaryWil28824418 added: “Whilst Labour are bouncing on the Tory demise, they do not have a clear mandate and if they implement their proposed policies then they too will bring the country to its knees.”