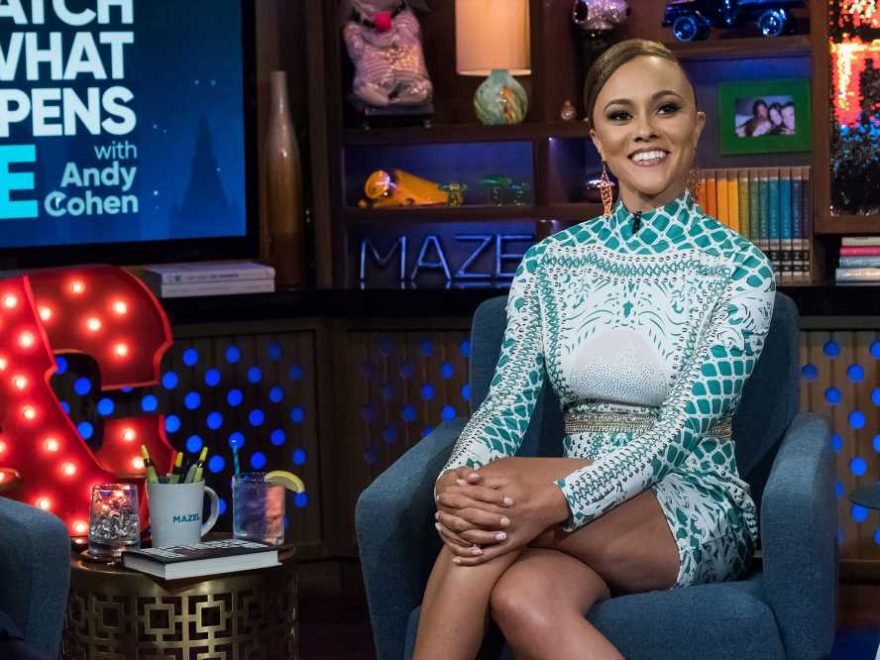 Ashley Darby took an emotional trip to Atlanta, Georgia, on Sunday’s episode of The Real Housewives of Potomac to tie up a loose end from her past.

The reality star visited her father, who she says left her family after divorcing her mom 30 years ago.

It was the first time Darby, 31, had met her father as an adult. She was 1 year old when her father left; he remarried and had more kids.

About five years ago, the former Oz Restaurant and Bar owner attempted to contact her father on Facebook, asking if the two could connect. She said he blocked her.

“It was really hurtful,” Darby recalled. “And yet even still, I have this nagging desire to find my dad.”

“When I sit with myself, I think about my life and who I am and all that. I think about my dad a lot,” she added. “I have never known my dad … I’m tired of thinking about it. I need it for myself. I need to close this chapter of my life to look to the future.”

She continued: “This is something I’ve been thinking about a long time, reconnecting with my other side of my family. So what’s stopping me? As I’m trying to embark on starting a family, I’m thinking about my kid and what my kid will ask. They will want to know about their grandparents and their aunts and uncles. I feel like it’s a responsibility of mine to foster those relationship.” (She and her husband Michael welcomed their first child, a son named Dean, on July 7.)

Her mother, Sheila Matthews, joined her journey, along with her father’s sister and brother-in-law, Aunt Sheila and Uncle Jim.

This was also the first time Darby had seen her Aunt Sheila and Uncle Jim in 12 years, though they had remained in contact over the phone. Darby said they were the only two people on her dad’s side of the family with whom she still had correspondence.

“Even if I haven’t been able to have a close relationship with my dad, the fact that my aunt and uncle still make an effort to want to talk to me and show me that they care about me? That warms my heart,” Darby said.

Aunt Sheila and Uncle Jim’s relationship with Darby’s dad is rocky as well. On Sunday’s RHOP, they revealed they hadn’t spoken to him in eight years.

“I have mixed feelings about you going to see your dad,” Jim told Darby. “I think your mom did absolutely the right thing, keeping you away from him. 20 years ago, he had a lot of demons running around inside of him. … I hope I’m 100 percent wrong.”

“My husband says the same thing. He does not think this is a good idea,” Darby said. “Honestly, what I’m just really looking for from this is just some sort of acknowledgement. Just to see his face.’ Cause everyone says we have the same face shape.”

“At this point in my life, I feel like I owe it to myself to make that effort and see what kind of response I get,” she added, admitting that while she was “scared,” she felt empowered. “Before, what would hold me back is this fear that he will reject me. But it’s not so scary that I couldn’t get on the plane.

Despite their reservations, Darby had the support of her entire family, including her mom.

“All I know is I am looking for my daughter to finally having some form of closure in my life,” Matthews said.

All four then travelled to the man’s household to knock on his door. Despite her pain, Darby went into the meeting with compassion for her father.

“When I put myself in my dad’s shoes, I think the shame of having abandoned me is too much for him to bare,” she said. “He can’t confront it. But I’m hoping that my dad will feel a little more comfortable having Uncle Jim and Aunt Sheila there. Maybe he’ll be more receptive to having a conversation?”

Fans will have to wait until next week’s RHOP to see their conversation, as Sunday’s episode cut off right as Darby approached her father’s front door.

However, sneak previews show the two did come face to face — with Darby telling him “Hi,” after Sheila said, “This is your daughter, Ashley.”

“Oh my god,” Matthews said in the preview. “There’s your father.”