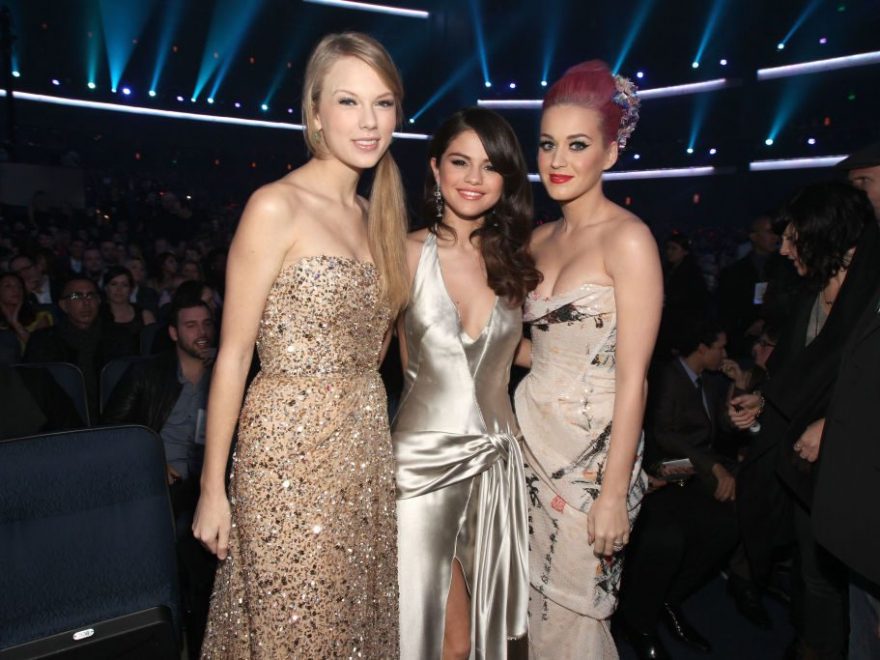 Swifties, Selenators, and Kay Kats, you’re not going to want to miss this one. Reports are swirling that your faves might be collaborating on a new song. Sources report that Taylor Swift, Selena Gomez, and Katy Perry may be debuting a new song together in less than three weeks. But is there really any truth to this report, or is it all just a product of the rumor mill?

Swift has always been one to reward her most loyal fans. Recently, the 29-year-old dropped easter eggs that gave clues about her latest album, Lover. But the “Archer” singer has an even crazier long-standing tradition that rewards diehard Swifties for their unwavering support. For years now, Swift has invited fans to her homes for secret listening sessions ahead of her latest album. In the past, fans who were fortunate enough to attend reported that Swift played her entire album for them and treated them to stories and cookies.

Lover, album out August 23. Cover shot by the artistic genius that is @valheria123 💗 Pre-add, pre-save, pre-order (all the pre stuff you feel like doing) Can’t wait for you to hear this.

Of course, Swift continued her time-honored tradition for her upcoming studio album, Lover. These sessions are very intimate and true to their name…secret. In the past, fans have even been uninvited to the session after they shared the news that they’d been invited to attend. However, despite the secrecy, leaks can and do happen. One Swift fan account claims that a fan who attended the secret session has confirmed that there will be a Taylor Swift x Selena Gomez x Katy Perry collab.

“According to a fan who was invited and attended to #LoverSecretSessions, there will be a Taylor Swift, Selena Gomez and Katy Perry collab. The song is all about women empowerment,” the account tweeted out. Some fans quickly believed that this collab could happen. Gomez and Swift are long-time besties and have stated in the past that they’d love to collaborate. Similarly, Perry and Swift just put their long-time feud to bed. In fact, Perry recently appeared in Swift’s music video for “You Need To Calm Down”, and Perry recently invited Swift to her wedding to Orlando Bloom.

But, skeptics were quick to see the flaws in this rumor. For one, a three-person collaboration between these artists would be tricky to navigate. Gomez, Swift, and Perry all have drastically different voices and finding a way to merge them would be difficult. Of course, it’s not impossible (read: Ariana Grande, Miley Cyrus, Lana Del Rey) but it’s certainly challenging. Furthermore, others who claim to have attended the sessions, are fully denouncing the rumor. “Not true! I was there. Please don’t make out that there have been leaks,” one super fan wrote.

This meal is BEEF-free #MeatFreeMonday 🍔♥️🍟 #YNTCDmusicvideo Link in Stories

Whether or not this is actually the truth, many fans are upset that this info is even being leaked in the first place. They feel that the fan who leaked the rumor violated Swift’s trust and the promise not to share anything they learned with the public ahead of the Lover’s release. “Wtf? do y’all legit not understand the meaning of secret session? Y’all are not supposed to leak any fuc*ing details about the album. We have to respect Taylor’s decision. She put a lot of trust in y’all sessioners,” one angry fan wrote.

I’m grateful for those I surround myself with. And this woman right here happens to be one of my favorites. Love our tradition and I love you.

We have to admit that a collab with all three ladies seems a bit farfetched. Maybe we’d be less skeptical if it was just a Selena Gomez x Taylor Swift collab, but throwing Katy Perry in there too just seems suspect. It’s one thing to mend a friendship with someone, it’s quite another to collaborate with them on your life’s work. Most especially, when just a few years ago you won a GRAMMY Award off the strength of a music video that was dedicated to shading them.