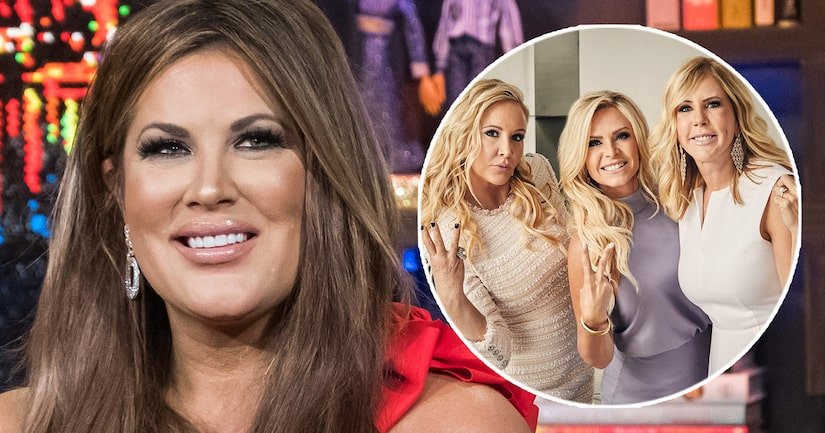 The attorney and mother of five also says she’s heard from people close to Shannon that she tends to change who she is when cameras are rolling.

No longer a novice of "The Real Housewives of Orange County," Emily Simpson’s opening up about going into Season 14 with several strained relationships.

During a recent interview with Domenick Nati, the attorney and mother of five said she felt Shannon Beador (who spent last season openly disliking the newcomers), Vicki Gunvalson (who was recently demoted to cast friend) and Tamra Judge (who introduced Emily to the show) were "just out for themselves."

When asked who of her co-stars tends to be the least trustworthy, Emily didn’t hesitate. "I’m just gonna group them all together and just say the Tres Amigas," she said. "I think that those three are just out for themselves. I don’t trust them as a whole, as a group."

Clarifying, she continued, "The Tres Amigas — they self-proclaim themselves the Tres Amigas — it’s Shannon, Vicki and Tamra. They stick together very tightly and they don’t like to go outside their group, so I would be leery of trying to infiltrate that group."

Emily also said she’s heard from people close to Shannon that she tends to change who she is when cameras are rolling.

"I just know that some of the other women have made comments that Shannon Beador is very different when she’s not filming, so that is just things that I’ve heard from other people that’re closer to her than I am," Emily said, adding that she can’t speak from firsthand experience because "I don’t know her very well at all. She still doesn’t talk to me very much."

Although she’s not Vicki’s biggest fan, Emily assured angry viewers that the recently demoted series OG is still "very much a part of the show and the cast." Shannon told TooFab the same thing.

"Honestly, I was surprised by [the demotion]," Emily revealed. "I didn’t know really what they were doing with Vicki. I have never spoken to Vicki about it. I’m sure that she’s not happy and probably feels a little rejected, but I know a lot of people have said, ‘I’m not gonna watch if Vicki’s not on it.’ I know Vicki has a different title, per se, but Vicki’s on the show, and she’s on a lot. I filmed with her a ton, so it’s not really like she’s making a little cameo here and there and just guest appearances. I mean, she’s very much a part of the show and the cast."

"I don’t think it was anything personal," she added. "I mean, obviously, Vicki Gunvalson’s great for TV. I mean, she’s amazing on TV, but I think it’s probably just a business decision, where they just need to kind of rotate out and rotate in. That’s what they do. It’s a business."

Emily was also asked how she would describe the current status of her unconventional marriage; she was given the options "happy, strong or troubled."

"I would say it’s probably a combination of all three," she said. "I mean, I’m not speculating that there’s any divorce or anything in the future, but you know, we definitely have our ups and downs. You’ll see a lot of that this season, especially with a lot of the pressures that we are dealing with as a married couple."

As viewers learned last season, Emily and her attorney husband, Shane Simpson, had quite the bizarre start to their marriage: He was a colleague who essentially agreed to marry her over Google chat. The two went on to have three children together. Emily’s sister, Sara, served as her surrogate. Shane, a strict Mormon, also has two other children from a previous marriage.

Shane made arguably more of a splash than Emily did last season after throwing a drunk Gina Kirschenheiter out of his home and getting into a nasty war of words with Kelly Dodd. He also became a fan-favorite to bash on Twitter. According to Emily, all of that combined "absolutely" put a strain on their relationship.

"It’s like taking a highlighter and highlighting everything bad that happens in your life or every time your husband says something snarky," she said. "It’s like putting a neon flag on it for everybody to comment and judge. It’s definitely hard on your marriage."

"Shane does a much better job of dealing with it," she continued. "He laughs at a lot of things, and when people make derogatory comments about him, he thinks it’s funny! But a lot of times, it’s not funny! Like, I get really affected by it."

While Emily says she’s learned to block out almost 100 percent of the online body-shaming she receives, it still sometimes gets to her.

"The body-shaming I just think is ridiculous. I know I ignore I’d say 99 percent of it, but when I do lash out, I lash out pretty hard," she explained. "But when I call it out and I lash out, I feel like I’m doing it as a spokesperson for all women who aren’t a size 0 or a size 2. It’s hurtful, but I don’t let it affect me. I mean, it stings, I have to be honest. It definitely stings to read all the horrible things about yourself, but at the end of the day, I still have a lot of confidence. I still think I have a great body. I still think that men love curves. I still think that I look healthy."

"Filming with such petite women, sometimes I feel kind of like the Jolly Green Giant next to them, but it’s just who I am, and it makes me unique," she added.

When asked to elaborate on the intensity of the cyber-bullying she faces, Emily said, "I would get comments from women, like direct messages, calling me ‘fat,’ ‘fatass,’ ‘you’re disgusting,’ ‘you need to lose weight.’ Even people said things like, ‘Your daughter’s fat. You need to lose weight for your daughter.’ I don’t know, I guess it was just the fatass comments where I was like, you know, I’m like a size 8 or something right now. I feel like if I walked passed you on the street you would’ve never said something like that to me! I just look like a normal, average girl walking down the street. But I don’t know, you put yourself in a position where people feel like you’re not a real person, and they can just comment and attack you and make fun of you and it’s hard sometimes."

Although she’s relatively all-natural, Emily has "no shame in the plastic surgery game."

"I’ve had a breast reduction and breast lift and implants, so I’ve had three breast surgeries," she explained, noting that the operations all came at different times, ages and weights. "I’ll probably do it again at some point whenever I feel the need. When I turned 40, I did a reduction and lift, so that was the last one."

Emily also said Season 14 viewers are going to be "totally surprised" to see her bond with Kelly, who she threatened to kill at a party after Kelly called Shane a "little bitch" and a "p—y" multiple times.

"It’s not every day you threaten to kill someone, so sometimes it’s hard to come back from that, but I’ll be honest, the viewers this season are gonna be totally surprised because Kelly and I have no issues," Emily revealed. "I consider Kelly one of my closest friends. It’s definitely done a 360, so it’s interesting to watch."

"I’m not the kind of girl who holds grudges," she added. "I mean, I threaten to kill people, and then I move on pretty easily."