Trouble is brewing in the Hamptons as Heather Thomson from The Real Housewives of New York City finds that her room is in Luann de Lesseps’ infamous “lower-level” at Ramona Singer’s home – and she knows the location isn’t exactly a warm welcome.

Thomson is walking into the lion’s den during an upcoming episode after the cast groused about how she’d been talking smack about them on her podcast. Thomson snarked about nearly every current cast member and Leah McSweeney was happy to re-share some of the highlights during dinner the previous evening. So does Thomson know the “lower-level” could mean she’s in trouble? 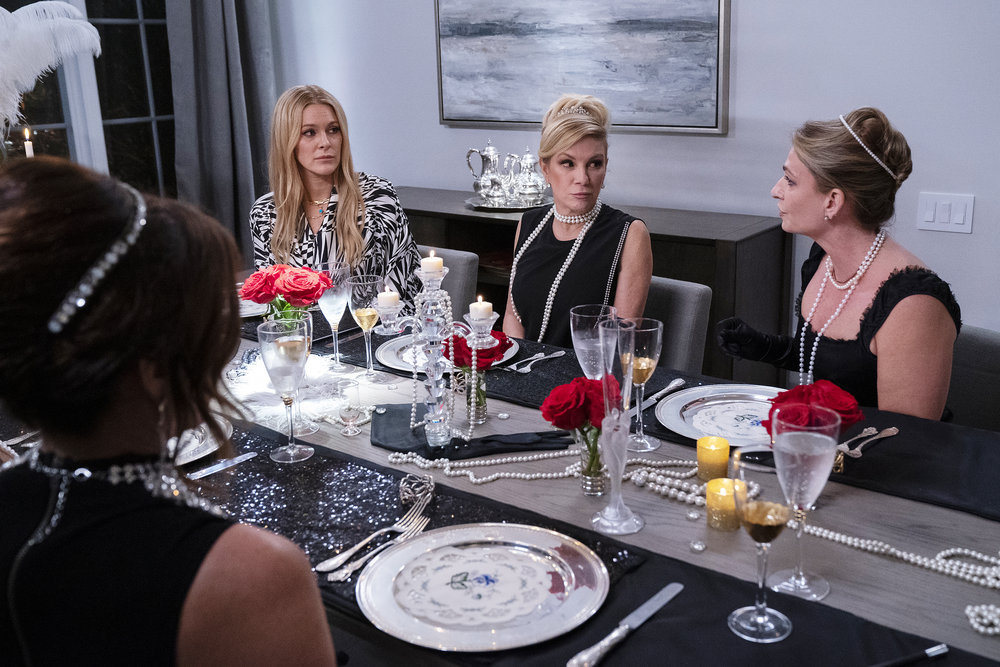 Heather Thomson gets an icy reception from Sonja Morgan

Thomson arrives at Singer’s home as the cast prepares for a Breakfast at Tiffany’s dinner party. The cast is busy getting ready but Sonja Morgan is in the foyer as Thomson arrives. Morgan welcomes Thomson as they chat about the party scene. Thomson says she brought several hair clips because they all need updos. “You’re the queen of updos,” Thomson says to Morgan in a preview clip. “So you need to help me with mine. Will you?”

Morgan grumbles. “I know Heather has a history of talking about me on her podcast that’s not in a good light,” Morgan says in a confessional. Producers flash to an article about Morgan: “Heather Thomson shares her thoughts on Sonja Morgan’s new face.”

“Last thing I’m gonna do is help her do her hair right now!” Morgan exclaims. “Next she wants me to carry her luggage. I mean …”

Singer, who was overseeing the decor and table preparation appears to greet Thomson. While she’s friendly, she decides to show Thomson to her room … the infamous “lower level.”

“You’re perfect!” Thomson gleefully says when she sees Singer dressed like Audrey Hepburn from Breakfast at Tiffany’s. That’s when Singer decides to show Thomson to her room.

“Let me show you where everything is so you can get ready,” Singer says. “So you’re gonna be downstairs, lower level. You’ll have your own private bathroom. And then when you are ready, you’ll come up.”

While Thomson tells Singer she loves it, she suspects something was amiss. “You know, I walk in and I felt it was a bit cold as ice,” she says about the mood and not the actual temperature of the room. “Now I’m being kinda banished down to the dungeon. But really that’s OK with me because I like a little separation.”

Later, during dinner, Thomson realizes her gut instinct was correct as McSweeney reads back to the table everything Thomson said about the cast. “I thought that was a real friendship, but nothing really I learned with Luann is genuine,” McSweeney reads to the table.

But Thomson owns it. “Yeah, that’s true,” she says. But that prompts de Lesseps to exclaim, “What?!”

The Real Housewives of New York City is on Tuesday at 9/8c on Bravo.