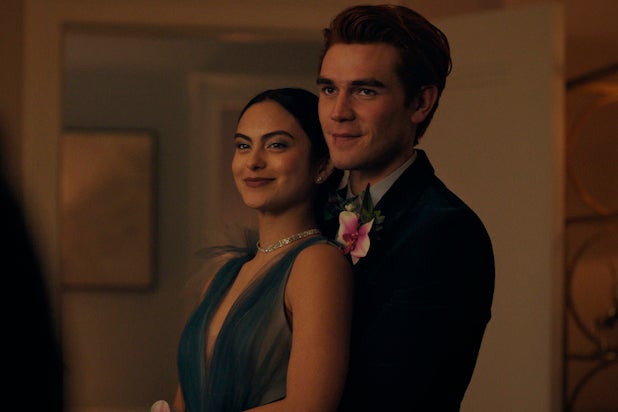 (Warning: This post contains spoilers for the Season 5 premiere of “Riverdale.”)

It was only a matter of time until Veronica Lodge (Camila Mendes) found out that her boyfriend, Archie Andrews (KJ Apa), and her BFF, Betty Cooper (Lili Reinhart), were having an emotional — and somewhat physical — affair behind her back. And that time finally came on Wednesday’s Season 5 premiere of “Riverdale.” But how it came about might have shocked fans of The CW’s dark take on the Archie comics.

You see, it was Archie himself — who had sworn with Betty at the end of Season 4 that they would not reveal their feelings for each other or their respective partners, Veronica and Jughead (Cole Sprouse), in an attempt to move on from the situation — who ended up telling Veronica on the dance floor during the Riverdale High Senior Prom.

Archie’s decision to spill the beans to his girlfriend came after she told him she was planning on delaying her admission to Barnard College in New York City so she could stay in Riverdale with Archie, who doesn’t know what his plans are after not being accepted into the Naval Academy. Veronica’s father, Hiram (Mark Consuelos), offered Archie a job at the Riverdale Sheriff’s Department, and Veronica wants to stay with him in Riverdale, should he accept the position.

It’s the idea that Veronica would make a decision that could affect her future so heavily that prompts Archie to confess what happened with Betty. He starts the conversation by telling Veronica that the song she found in his room — the one she thought was written for her and which she performed earlier in the episode at her speakeasy — was actually written about Betty.

Veronica is devastated, but must hide her feelings until the end of prom, when she and Archie discuss the implosion of their relationship and decide it’s best to not tell Jughead about it, in hopes that he and Betty can still make it as a couple.

We don’t know what comes next for the “Riverdale” crew, but we do know the show will be jumping ahead seven years in just a few episodes, and that the role of Veronica’s husband, Chad Gekko, has been cast — and he’s apparently not a fan of Archie’s.

“Riverdale” airs Wednesdays at 8/7c on The CW.