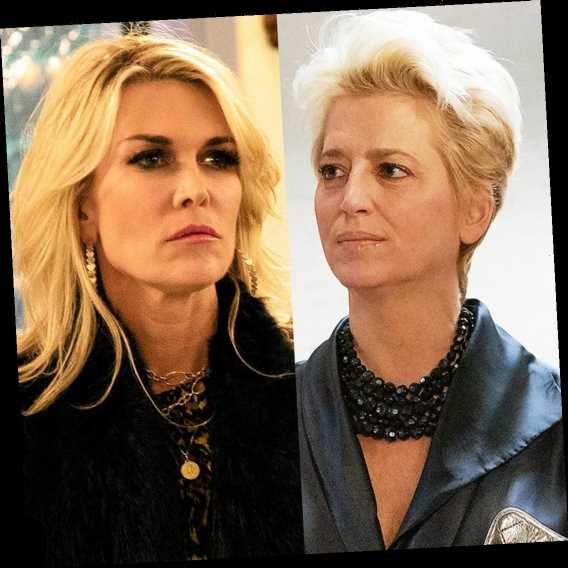 In this exclusive clip from part one of the RHONY reunion, Tinsley holds Dorinda accountable for her turkey baster joke! See Andy Cohen's reaction.

In this exclusive clip from part one of The Real Housewives of New York City reunion, which airs tonight, Sept. 10 at 9 p.m. on Bravo, Tinsley Mortimer calls out Dorinda Medley for her turkey-baster joke from earlier this season.

At the start of the clip, both women inform reunion host Andy Cohen that they haven't spoken since Tinsley's early departure from the show.

"I think Tinsley's only spoken to Leah," Dorinda notes. "Tinsley never really spoke to any of us after she left every year anyway."

In response to this jab, Tinsley reminds Dorinda that they "were actually friends at one point." Yet, as the tension grows, it's clear the ladies are no longer on friendly terms.

"I mean, the vile turkey-baster comment," Tinsley states. "When women who cannot get pregnant and the infertility is such a huge…"

Before Tinsley can finish her point, Dorinda inquires if her co-star is having trouble getting pregnant.

While Tinsley attempts to articulate a response, Dorinda jumps in and adds, "No, I was just saying…I'm sorry about that."

Not hearing Dorinda's—somewhat lackluster—apology, Tinsley claims she's been "shamed for wanting a child" and "shamed for not having one."

Kris Jenner on Why the Family Decided to End KUWTK

In response to this claim, Dorinda retorts, "I'm surprised you're not pregnant already! You've been talking about getting pregnant."

At this point, the other Housewives jump in and defend Tinsley.

Ramona Singer, notorious for her Singer Stingers, even warns, "Dorinda, that's not nice."

As the conversation continues, Tinsley states that Dorinda's turkey-baster comment was a clear dig at In Vitro Fertilization.

"A turkey-baster? That's IVF, ok?" Tinsley sounds off. "Andy's baby was from IVF. Would you say the same thing to Andy?"

Ironically, as Tinsley finally airs her grievances, Dorinda apologizes for the comment—an apology that would've been missed without Ramona's help.

Following Ramona's helpful interjection, Dorinda expresses, "I said I'm sorry I said that. I apologize. It was a bad joke and I'm sorry."

Unwilling to accept the apology, Tinsley snaps that "it's not a joke."

Even Andy weighed in on the comment, noting, "I thought it was mean."

As Dorinda defends that her co-stars laughed at the remark, Tinsley calls the jab "so awful."

"You still said it," she concludes. "And it will never go away."

Watch the drama unfold in the exclusive clip above.

You can binge past seasons of RHONY when it hits Peacock on Sept. 20.

Part one of the Real Housewives of New York City reunion airs tonight, Sept. 10 at 9 p.m. on Bravo.

(E!, Bravo and Peacock are all part of the NBCUniversal family)