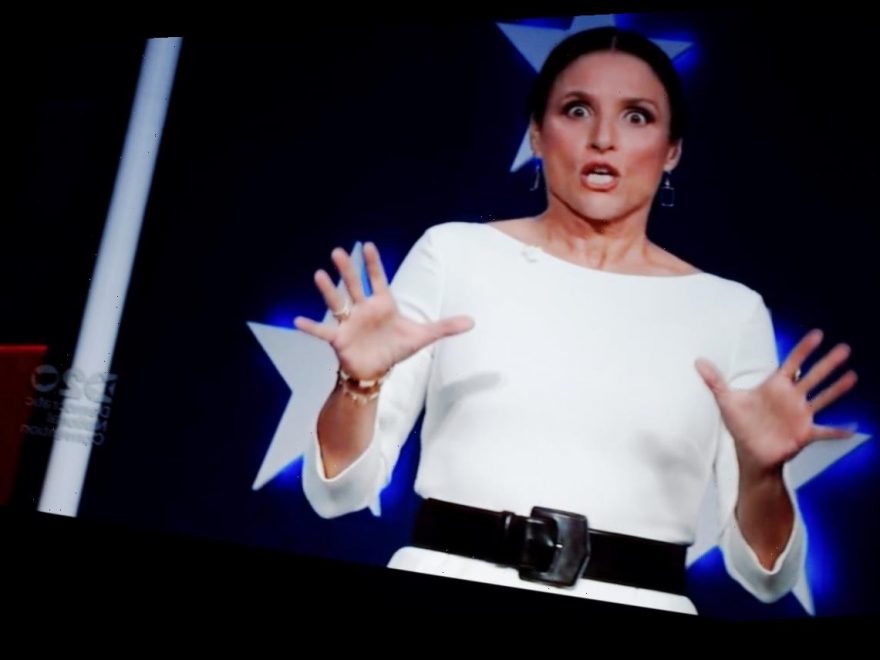 Julia Louis-Dreyfus subjected herself to many humiliations as Elaine Benes on Seinfeld. There were the little kicks and the nip slip photo to name a few. Even Jerry Seinfeld and Larry David couldn’t make up some of the indignities Louis-Dreyfus endured in real life. Ever the good sport, Luis-Dreyfus shared them publicly.

Louis-Dreyfus was a guest on the Smartless podcast on Jan. 18. She told hosts Sean Hayes, Jason Bateman and Will Arnett about the time she got recognized for Seinfeld while giving birth. Caution, Louis-Dreyfus does not hold back in her description of childbirth details.

Seinfeld began in 1989 as The Seinfeld Chronicles. The first season was only four episodes and it was pretty rough. Early incarnations had Elaine as a love interest for Jerry. They quickly thought better of that. Elaine had as many dating problems as Jerry and George (Jason Alexander). She also stockpiled her favorite contraceptive, the sponge, and worked for J. Peterman.

Louis-Dreyfus was not thinking about Seinfeld the summer of 1992. She was hoping to be a normal childbirth patient at a famous Los Angeles, California hospital.

“I’m giving birth to my first child,” Louis-Dreyfus said. “I weigh 160 pounds. I’m at Cedar’s. I’m completely naked. I’ve got the thing around my stomach that’s monitoring everything.”

Labor can take hours, so Louis-Dreyfus needed to use the restroom to relieve herself. Just at that moment, her body decided to proceed with the birth.

“I’m in the bathroom,” Louis-Dreyfus said. “I go into the bathroom because I’ve been there for a while. It was a long, long labor with this one. All of a sudden, there was bloody show and my water has just broken.”

That was not the time to meet a ‘Seinfeld’ fan

Normally, Louis-Dreyfus is gracious about meeting Seinfeld fans. This was not the time she wanted to hear that someone loved her work, let alone somebody she was depending on for medical attention.

“So I’m sort of over the toilet, squatting,” Louis-Dreyfus said. “This nurse comes in and she looks at me and she goes, ‘Elaine!’ Is that awful or what?”

Since Seinfeld, Louis-Dreyfus went on to star on The New Adventures of Old Christine and Veep. She has not had any more children, though, so hopefully all her new fans have limited their fanfare to social occasions.