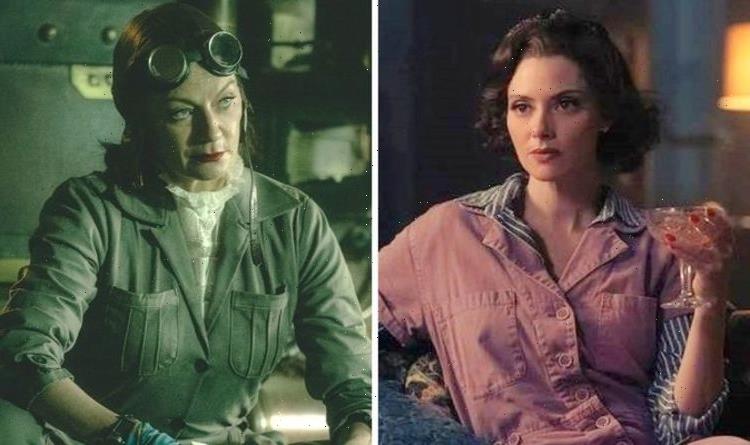 The third season of Doom Patrol has brought the quirky team of DC heroes back for more adventures, and a number of sinister new supervillains have already been thrown into the mix. As the latest episodes roll out on HBO Max, series star April Bowlby spoke to the Express about the team’s mysterious new enemy, Madame Rouge (played by Michelle Gomez).

Doctor Who and Sabrina star Michelle Gomez takes on a guest role as the mysterious new member of the team for the DC show’s third season.

Arriving in a run-down time machine in the season premiere, Rita and the rest of the team find Rouge casually living in Doom Manor when they’re resurrected in episode three.

Bowlby told Express: “She kind of comes into Doom Patrol and takes over and everyone’s upset about it.

“[Rita] doesn’t like her. She keeps saying you’re not the team leader.

“But obviously Madame Rouge behaves like a team leader so there’s a lot of challenge with that.”

After their altercation with the Night Nurse, the Doom Patrol are preoccupied with curing their zombification in episode four, ‘Undead Patrol’.

The forgetful newcomer takes advantage of the commotion to explore the manor, eventually identifying herself as the shapeshifter Laura De Mille.

However, Rita has started to suspect Laura, known in the DC comic books as Madame Rouge, as having something to do with their battle at the Codsville Mountain Resort.

As Laura learns more about her identity throughout the new season, she and Rita begin to vie for the team’s leadership position.

“These women keep challenging each other for the leadership role,” Bowlby explained.

“Rita wants to be a leader as well, she’s just not quite as confident as Madame Rouge.

“But Madame Rouge isn’t playing, so it’s almost like Rita’s battling with herself.”

Their confrontation will eventually start to reveal more about Rita’s own insecurities as she tries her hardest to make her stamp on the team.

Meanwhile, Madame Rouge’s hunt for Caulder could have sinister implications as her connection to the supervillain team the Brotherhood of Evil is gradually exposed.

While the same can’t be said of her character, April Bowlby was thrilled to have Michelle Gomez on board as a guest star for Doom Patrol’s third outing.

“She’s incredible,” she said. “Luckily my storyline intersected with hers.

“It was fantastic to watch her work ‘cause she had these long monologues. And she would do it so effortlessly.”

The latest instalment is shaping up to be just as zany and thrilling as the last, so comic book fans should be sure to tune in each week to watch the mystery of Madame Rouge unravel.