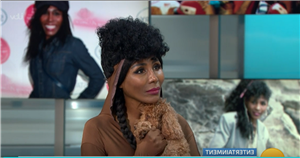 Sinitta has revealed she was banned from dating app Hinge because they thought she was a catfish when she registered under her real name.

The So Macho singer and TV star decided to take the plunge and look for love online during lockdown, but her attempts at romance were thwarted by suspicious singles who thought she was pretending to be famous.

Sinitta, who is an ex-girlfriend of both Simon Cowell and Brad Pitt, told Good Morning Britain on Tuesday that she was kicked out of Hinge for being a catfish, but even after being allowed back on the app, she felt nervous about dating.

The 52-year-old said: "I was on the Hinge because all my single girlfriends were on it and they were meeting people, going for walks and all of this.

"So I said ok, I’m going to do it, even though I thought I would never do a dating app. Signed up and it was all lovely.

"And then – after I’d spoken to (people) and sent roses and likes to different people, it was going really well – my account was banned because they said they thought I was a catfish. So it’s like when people fake being someone. They didn’t believe it was me."

During a radio interview with First Dates star Cici Coleman, whose name Sinitta couldn't remember on Good Morning Britain, she realised the reason that she had been banned.

She told Susanna Reid and Adil Ray: "I was speaking to another girl about it and she was like, oh my god, the same thing happened to me. Her name’s gone out of my head, you know she’s the waitress.

"We were on a radio show talking and she said it’s because they think you’re a catfish. Because I just said I got banned and I don’t know why.

"So then, because Hinge heard about this conversation, they sorted it out."

But while Sinitta's profile is now back online, it doesn't sound as though it's currently active as she is too nervous to meet strangers alone.

Holding her dog Scarlett who she said had got her through lockdown, she admitted: "I have an account, but I’m scared to go walking in the park with strangers. Sounds a bit strange doesn’t it, really?"

As Susanna said she thought meeting for a date would be ok, Sinitta asked her: "Is that normal? Would you do it? Would you go for walks in the park with a complete stranger without a friend sort of trailing you, watching with binoculars?"

But she added: "It’s the only way you can meet anyone because otherwise it’s through recommendations of friends but either my friends are divorcees looking for men in the same age group, or they’re married. So they’re not going to just give me their men, are they?"