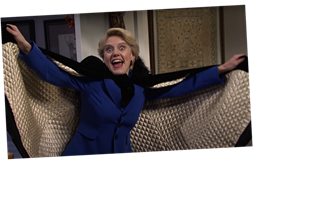 “Saturday Night Live” this weekend was hosted by John Mulaney with musical guest The Strokes, and naturally, just a few days ahead of the election on November 3, the episode was plenty political. Jim Carrey reprised the role of Joe Biden that he’s established all season for a spooky Halloween message for voters, but more notably, Kate McKinnon returned as Hillary Clinton, whom she made iconic during the 2016 Presidential election. Watch the cold open from Saturday’s episode of “SNL” below.

“Greetings America. It’s a spooky time filled with demons and darkness. Also, it’s Halloween,” Carrey’s Biden says. “For some Trump voters, it’s the only day they’ll wear a mask. Like my decorations? I stole them from Melania’s Christmas display. Which reminds me, there’s another holiday right around the corner: Election Day. If you’re like most Americans, you’re excited to vote. And very, very worried about the outcome.”

McKinnon arrives to crash the party on Joe Biden’s optimism for winning the election. “Even if you do win on Tuesday, the election could still be stolen from you,” she says. Jim Carrey’s turn as Joe Biden has been met with mixed reception throughout the season, which is currently the 46th in “Saturday Night Live’s” run, but this week the comic actor benefited from taking his impersonation outside the arena of the debate. Alec Baldwin’s Donald Trump, a character he has made iconic if controversial on the NBC series, doesn’t appear in this episode.

Throughout the cold open, Kate McKinnon not only returns as Hillary Clinton, but Maya Rudolph also reprises her turn as Vice Presidential candidate Kamala Harris. Rudolph also pops up again later in the episode as a world-weary Statue of Liberty during one of the episode’s several New York City-themed (and musical) sketches.

Next weekend, on Saturday, November 7, Dave Chappelle will be hosting “Saturday Night Live” on NBC. It’s his first return to hosting since the weekend that Donald Trump became president.

Watch the cold open from the John Mulaney-hosted episode of “Saturday Night Live” below. This was the fifth episode of the season so far.