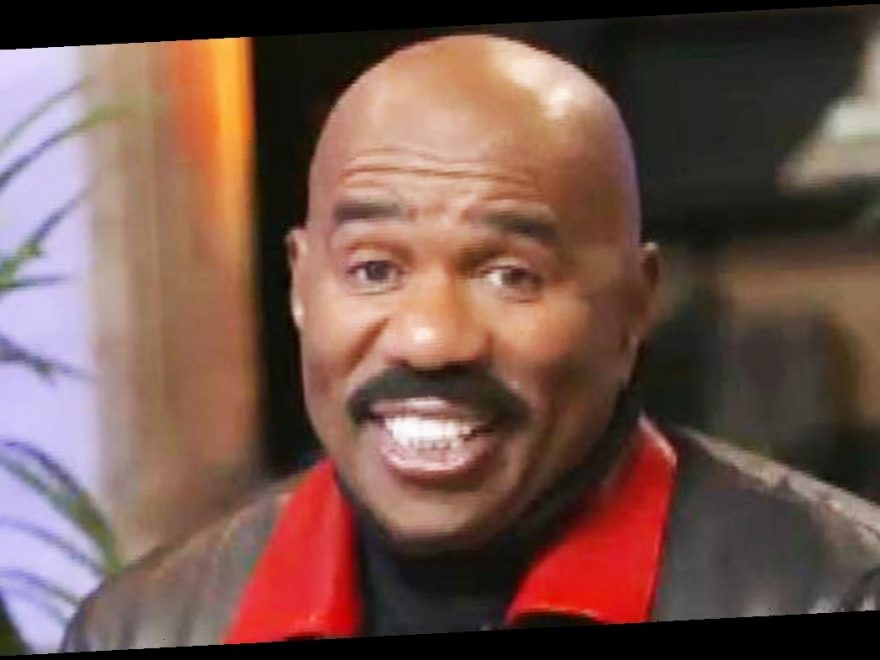 A bar built for his dad, a man cave doubling as a green room, weekly COVID-19 tests and a live audience “wall” — Steve Harvey is taking ET on an exclusive tour of his home-turned-virtual set! The 63-year-old media personality launches season 2 of his Facebook Watch series, STEVE on Watch, on Sep. 14, and it all goes down at his Atlanta, Georgia, mansion.

Harvey was in the middle of season 1 of the talk show when the coronavirus pandemic hit, but he’s no longer letting the global crisis halt the passion project.

“I’m so happy to see these people,” he tells ET about filming at home. “Y’all, I’ve been in quarantine since March. It’s a blessing to be working, so I’m happy. I like seeing all these people around here because I was tired of talking in my house, and I’ve been talking to the same person for five months.”

Harvey is one of many television personalities who have continued to host from home during the coronavirus pandemic.

One whose at-home segments proved popular early into the pandemic was Ellen DeGeneres, who has since come under fire following claims of workplace misconduct on her daytime talk show, The Ellen DeGeneres Show.

What advice would Harvey give her?

“Ellen [has] got a lot of money. If I was Ellen, I’d just walk away,” he says. “She got enough. I wouldn’t let them drag me down like that!”

Harvey is no stranger to moving forward following drama. In 2019, his daytime talk show, Steve, was canceled by NBC. In hindsight, it was a blessing, as Harvey now describes STEVE on Watch as “one of the coolest things I’ve done.”

“It’s fine, man, because it really opened up a door that I didn’t know existed,” he says of Steve ending. “And, this Facebook show, STEVE on Watch, has been such a tremendous blessing.”

Upcoming episodes of the show feature celebrity guests like Gabrielle Union, Jack Black and Steph Curry. “What I love most [is] the ‘Hey, Steve’ segment,” he says. “It’s the closest thing I do to stand-up. I just stand up telling jokes to people.”

“We do a lot of human-interest stories,” he adds. “We have a lot of stuff that will go viral, which is what this whole concept is about.”

Due to the pandemic, Harvey, his on-site staff and crew get weekly COVID-19 tests and the show uses a giant screen for around 50 audience members to attend via Zoom.

“I found a way to bring the audience into my home because I couldn’t do this without an audience,” he says. “The wall you’re on right now is the studio wall and when I pick one of the studio members to talk to, it shows up. And, you have studio members on the top and bottom [surrounding them,] so I get the full studio feel.”

“They can comment, talk, I can hear them laughing, they can respond to me, I can walk up to them and point at them,” he adds.

Harvey also has a cigar lounge, golf room and putting area at his home, but it’s his “man cave” which has been turned into the show’s green room. The area has a bar, which he built for his father.

“I worked at a comedy club and when he was living, he came down to it and couldn’t believe he could sit at a bar and all the drinks was free,” Harvey explains. “He didn’t even come inside to watch the show — he would watch it on the monitor.”

STEVE on Watch is one of three projects keeping Harvey busy during the pandemic.

He’s also enjoying time with his six grandchildren — with another one due next month — and his wife, Marjorie.

“Marjorie said to me the other day, ‘Steve, there is no way I could have ever gotten you to take four months off work,’ and she is absolutely correct,” he says. “It’s been really cool. We have had some great moments — moments like any other married couple in a pandemic. I ain’t funny at all to my wife anymore!”

See more on Harvey below.