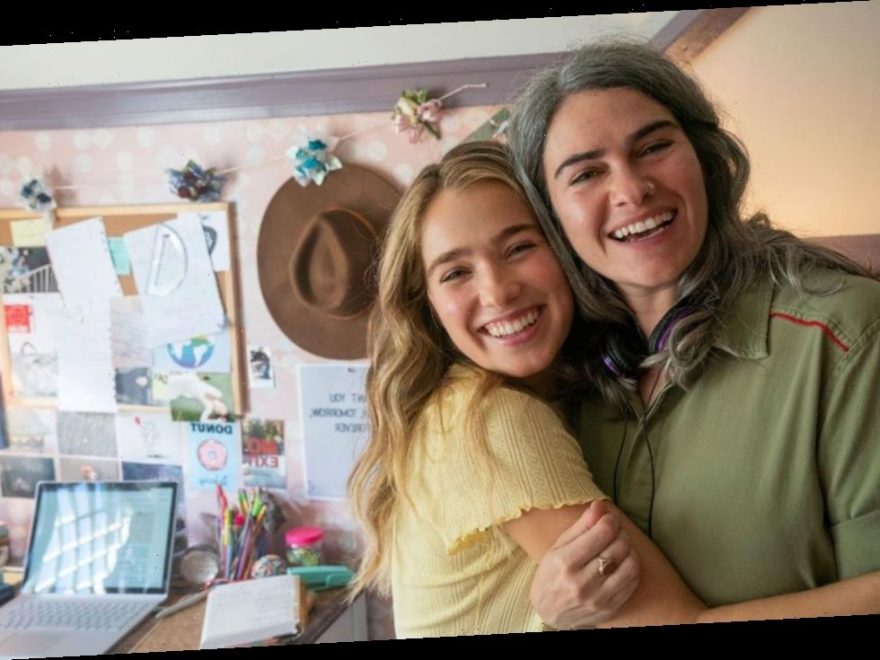 Rachel Lee Goldenberg and Haley Lu Richardson first collaborated together on the 2013 Lifetime movie “Escape From Polygamy,” in which the rising star played a 17-year-old looking to leave a polygamous compound. Their new film, “Unpregnant,” premiering Sept. 10 on HBO Max, is a big departure — it’s a comedy, but not an easy one to categorize. Based on the book by Ted Caplan and Jenni Hendriks, the film centers on the friendship between two teen girls named Veronica (Richardson) and Bailey (Barbie Ferreira) who take a road trip to another state so that Veronica can have a legal abortion. Part teen comedy, part road trip movie, the film also has some very dramatic moments — and even an action scene that would feel at home in “Mad Max: Fury Road.”

“What I love about the movie is that it is hard to describe,” says Goldenberg, who co-write and directed the film. “We have a tone you can’t easily point to another movie for. I can be sort of flippant about it and say, ‘Oh it’s a classic abortion comedy.’ But really what I’m proud of is that it’s hard to define and it’s best for people to watch it rather than explain it.”

Since their first collaboration, Richardson has gone on to films like “The Edge of Seventeen” and “Columbus,” which earned her a Spirit Award nomination. This is the second feature film this year for Goldenberg; she directed “Valley Girl,” which was released in May. A filmmaker who cut her teeth on low-budget movies for The Asylum and working at Funny or Die, Goldenberg earned an Emmy for producing the “Between Two Ferns” episode with President Barack Obama. The pair reunited to discuss the making of “Unpregnant” and the challenges of the unique movie.

How did the story find its way to you and what attracted you to the project?
Rachel Lee Goldenberg: My agent sent me the manuscript to the book and I thought it was such a brilliant idea. I loved the characters and it was such a smart way into this topic; it was license to have a fun epic adventure that innately has this important message

Haley Lu Richardson: My agents called me and tried to explain the movie to me but, you know, it’s very unique and complex. They interested me, but also confused me as they were all trying to describe it on the call. (Laughs) But I read the script and met with Rachel over breakfast. We worked together before, we have very nice history of escaping polygamy together in a film we did for Lifetime. It was cool to reconnect with you and hear your personal connection and passion and your vision for it. I could feel how much you cared and you were literally the perfect person to tell this story.

Goldenberg: Yes, I previously directed this film and there was this not particularly well-known actor who came in and blew everyone else out of the water. I remember it was magic. Since then, I’ve been waiting for the right thing to make Haley come work with me and hang out with me again.

So there was no audition; that has to be nice?
Richardson: Oh, it was great. I was talking about it with Rachel, how auditioning is the worst thing. I equate it to being in school and taking tests. Some people do well under a type of pressure and are good test takers, but they’re not necessarily super smart. Some people are smart and suck at tests. Sometimes you’re good at both — there’s all these different combinations. But I have never fully gotten used to auditions in the last 10 years. It’s the opposite of what it actually feels like to be on set after you’ve had time to collaborate and explore the character.

Rachel, I know all films are personal to the filmmaker, but Haley mentioned this was particularly personal to you. Would you be willing to elaborate on that?
Goldenberg: I had an abortion years ago and have been pro-choice my whole life. But after I got my abortion, I didn’t talk about it with many people. I didn’t question the decision, it just felt like something you don’t talk about. It somehow felt inappropriate. Then I started reading about the history of this issue and how actually since the 1980s it’s a norm that’s been created by society where we’re making it less and less okay to talk about and that me not talking about it was sort of its own political act. And that talking about it could be a political act. Because it’s something people shouldn’t be ashamed of because I think it’s a normal medical procedure that should be a person’s individual choice. Any shame coming from that is from the propaganda around it and not actually how I feel about it. So that sent me on a journey to want to be talking about it and telling people and having conversations with people. And that all happened about a year before I was sent the book. So when I saw the book it made sense to me that this was a way to talk about it.

Haley, what were some of the challenges of this role?
Richardson: Figuring out the tone was important to me. It was like walking on a tightrope and it felt like I was falling off left and right. And I wanted to do justice to Veronica because without a person with real feelings, it doesn’t even matter what you’re making a movie about. I did a bunch of research and read articles and watched videos that were pro-life and pro-choice, and really wanted to get a broad handle on the different things that people genuinely feel and experience. The main thing that stuck out to me, especially the videos about women who had abortions, was how personal an experience it is. Every situation and every woman feels so differently about their choice and how it affects them later. You can’t even think of every situation for every woman, so how do you make one rule for every person?

Barbie Ferreira is so great in this film and the chemistry between the leads is so wonderful. Was there a chemistry read prior to shooting?
Goldenberg: Having seen “Euphoria,” which she’s fantastic in, this is such a different character. When she came in, it was immediately evident she was perfect for it. I made them read together and one scene was on a carnival ride and I knew I was being a little unfair making that the audition scene, but I wanted to see if she would go there. Haley and Barbie sat in these two chairs together and screamed and laughed and did the lines and it was so magical and funny. That video got passed around and it was obvious she was Bailey.

Richardson: There’s been a couple times as an actor where I’m cast and get to do chemistry reads with other actors. It’s so interesting to be involved with that process from a different perspective. They read a few different people for Bailey and they were all great. But Barbie is so much Bailey and what she is and brings to this character makes it 10 times more real and unexpected and not stereotypical.

You’re making a road trip movie with multiple locations and working on a budget. Was that challenging?
Goldenberg: I come from really low- budget filmmaking; before Lifetime I made even lower budget sci-fi and action films [for Asylum]. So I’ve shot epic battles in 10 hours with 10 extras I had to make look like 100. So I was sort of right at home with the challenges. That’s part of the fun, every day was a totally different thing. So I’m used to that, but I wouldn’t complain if we had twice as many days.

Richardson: Another challenge was the arctic temperatures in Albuquerque. I was prepared to be in the desert, but it was freezing!

Goldenberg: Every single day off I would go to REI to buy more warm clothes and every single time I would run into a cast or crew member there for the exact same reason.

This film is obviously going to spark conversation and people are going to have very strong opinions, whether they see it or not. How do you feel about that?
Goldenberg: We got some extremely negative comments based on the trailer and those people won’t ever see the movie and we can’t do anything about that. It’s frustrating and it feels like sometimes it’s bad faith as it’s not based on the content of the movie. I feel proud of the movie and feel confident with what it’s saying. I’m happy to engage, but I don’t know how much I need to do because I spent a year and a half making my side of the engagement, and people can see it and feel how they feel.

Richardson: I agree the movie really speaks for itself and remembering my agents trying to describe it over the phone, it’s hard to explain in an easy way. I just really want people to watch the movie from beginning to end because what I feel is so beautiful is in the friendship with Vanessa and Bailey — they love each other and balance each other out and make each other’s lives way better. It’s the same with Veronica and the relationship with her mom. They love each other and that honestly is something that makes the world so beautiful. Everybody’s different and everybody sees the world through a different lens and you can’t even begin to understand how someone sees the world, but you can love them and respect that. I think that’s something that the movie does really well. So I hope people are open minded to watch it and let it move them.