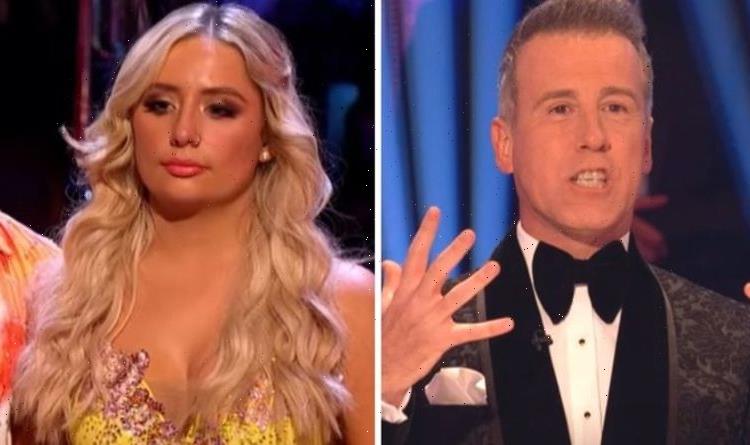 Anton du Beke took his seat on the Strictly Come Dancing judging panel this year, replacing Bruno Tonioli. The professional dancer swapped the dance floor for the panel and joined regular judges, Craig Revel Horwood, Motsi Mabuse and Shirley Ballas on the show. Anton has been criticised by viewers throughout the series for his “harsh” feedback. However, in an exclusive interview with Express.co.uk, former Strictly star Saffron Barker has opened up about Anton’s critique.

Saffron took part in the 2019 series of Strictly and was partnered up with AJ Pritchard, who has since left the show.

The influencer managed to make it more than halfway through the competition.

However, she landed in the bottom two, when she and AJ failed to impress the judges with their Samba.

Speaking about Anton’s new role on the judging panel, Saffron began: “I just I’m so happy for him.”

The YouTuber continued: “When I went on the show, he told me then that he went to be a judge.

“He was like ‘That’s a dream.’ So I absolutely love seeing him on there.”

Addressing Anton’s “harsh” feedback to the celebrities, Saffron explained: “Maybe he can be harsh in certain ways, but I feel like he kind of has to be a little bit.

“Because he’s been a pro himself, he’s got to be to get that judge status.”

“So for me, I absolutely love having him as a judge,” Saffron added.

Discussing her time on the show, the 21-year-old said: “It doesn’t feel as long ago as it was.

“I do kind of feel like I was on it yesterday, but at the same time when someone talks about it they’re like ‘oh yeah, there was like two years ago’ and I’m like ‘wait, when was I on it?’

“But I’ll never forget it. I just had the time of my life.”

The celebrities taking part in the competition this year include the likes of Dan Walker, AJ Odudu, Tilly Ramsay and EastEnders star Rose Ayling-Ellis.

The majority of the stars have to fit their work commitments in between rehearsals.

Dan continues to present BBC Breakfast from Monday to Wednesday, while Rose still has to film for EastEnders.

Saffron went on to recall how tough training for the competition was.

She explained: “The training was tough like it definitely was tough.

“I mean, I was lucky because with my job because I almost worked myself in the sense of I didn’t have to go to work.

“So I freed my whole schedule for the show. So, I could train for 10 to 12 hours a day, but obviously, other people they had work schedules.

“And if you’re not putting in those hours, you’re not going to see the results.

“So I can completely see how people are struggling [this year]. But for me, I was super lucky because I had the time to train.”

Strictly Come Dancing airs on Saturday at 6.40pm on BBC One.