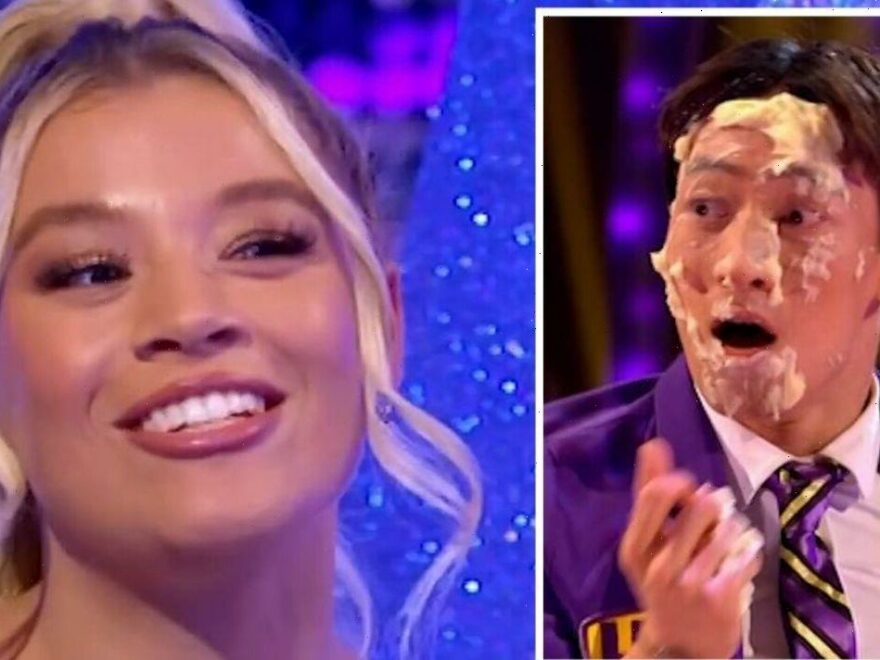 Strictly Come Dancing star and singer Molly Rainford and partner Carlos Gu joined Rylan Clark for another edition of Strictly: It Takes Two on BBC Two. The three discussed their performance on Saturday where they performed the Couple’s Choice to the Grange Hill Theme Tune and scored 30 out of a potential 40. However, when discussing the iconic mash smash into Carlos’ face, Molly revealed she had given him a warning hours before the show.

Touching on the routine and the fun element they added to it, Rylan asked: “You mentioned it earlier talking of fun, how enjoyable was this to do?

Laughing at the moment, Molly revealed: “It was real!” to which Rylan continued to ask: “Please tell me it wasn’t hot?”

“No! It was cold!” Molly replied before she went on to explain the warning she teased Carlos with. “I’m not sure what one is better!

“But I mean I just told him, like, ‘You better not annoy me today because there might be some force in there’.

“But he didn’t so I was trying to be nice but it was part of the show!”

Rylan went on to speak about the harsh comments they received from the judges: “It was so funny and it was such a fun routine.

“It was energetic, it was up, and you must have been feeling on quite a high there but then the judge’s comments came in and I think a lot of us thought this isn’t what we were expecting Molly?”

Sighing, Molly explained: “Yeah I think, you know, after watching Tyler [West] and Dianne [Buswell]’s Couple’s Choice and they did a similar style, they were really into it that week.

“So I thought, ‘Okay, maybe we are in with a good chance of them enjoying our one’, but I completely get what they were saying.

“I guess with the theme tune and everything maybe it wasn’t as exciting as most of our dances have been because there weren’t a lot of places to take it.”

Commenting on their performance on Saturday night, Anton Du Beke said: “It is certainly another excellent performance.

“Every week you have come out and I have watched you dance, dances that I wouldn’t have expected you to dance so well, great technical ability and great flare.

“When I heard you were doing Couple’s Choice and you were going to do this style of dance I thought, ‘Oh this is going to be great’ and it was great, but it was just a bit safe.”

Craig Revel Horwood chimed in: “It is not my favourite, I have got to be honest. It lacked any definition, each move has to finish and you didn’t pull that off. I felt like every move was thrown away.

“You have got to create a picture with this type of dancing and be into the earth, so sorry but not a great one for you.”

Motsi Mabuse added: “I don’t think it was that bad, I think it is very difficult to get the type of vibe with this type of music, so I think you did the best with what you had.”

Finally, Shirley Ballas praised: “Everyone is settling nicely into their performances now, including yourself.

“What I would have liked to have seen Carlos and a way forward is different changes of energy, it started with the fun face but carried on all the way through. I needed to have a change in it.”

Strictly Come Dancing airs Saturday from 6:30pm on BBC One, followed by the results on Sunday.