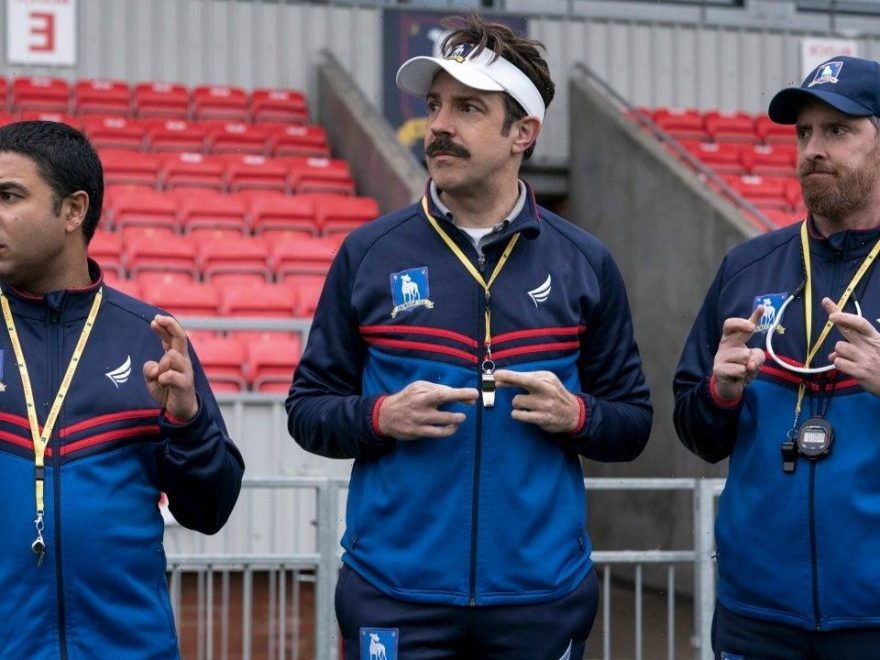 Spoiler alert! Do not proceed if you haven’t watched the Ted Lasso season 2 premiere, “Goodbye, Earl.”

Ted Lasso’s award-winning first season had many calling it the feel-good comedy series of 2020. And it seems the show took that title as a challenge — kicking off season 2 by killing a dog.

That’s right. The opening scene of the new season — which premiered Friday on Apple TV+ — finds AFC Richmond in the midst of streak of ties, following their relegation in the heartbreaking season 1 finale. There’s hope in the form of a last-minute penalty kick, but just as Dani Rojas (Cristo Fernández) winds up to boot it, the team’s mascot — a greyhound, appropriately named Earl — gets loose and runs onto the pitch, and right into the path of Dani’s laser kick.

The traumatic moment leads us, of course, to the first patented Ted Lasso (Jason Sudeikis) moment of the season, as the good-hearted coach shares a heartwarming story with reporters before trying to comfort Dani, who is in the showers, fully clothed, reciting the rosary and trying to “wash the death off.”

But it also helps introduce a new character, and what seems like it may be one of the central conflicts of the season. When Dani comes down with a canicide-induced case of “the yips,” Ted reluctantly agrees to bring in a sports psychologist — despite his “general apprehension and modest Midwestern skepticism” about therapy.

Her name is Dr. Sharon Fieldstone (Sarah Niles), and as luck may have it, she’s a bit icy on Ted as well, and apparently the only person in the AFC Richmond orbit not charmed by the coach’s “aw, shucks” attitude and penchant for office games and fun nicknames. However, she works wonders on Dani and soon, other players are lining up to talk.

When ET caught up with Sudeikis at the season 2 premiere last week, he explained that, despite Ted’s negative feelings towards analysis — which we later learn is due to an upsetting bout of couples’ therapy with his now-ex-wife — the storyline will end up being an important one for many members of the on-screen team.

“We all have stories within us, so sometimes you got to go inside and see what is going on,” he shared. “The idea is that sometimes the best way to help others is to help yourself.”

The premiere also saw Roy Kent (Brett Goldstein) adjusting to post-football life after announcing his retirement. He’s coaching his 8-year-old niece’s team in foul-mouthed fashion, and dodging every attempt girlfriend Keeley (Juno Temple) makes to get him to visit old friends or consider a sportscasting gig.

Roy does get what might be the shining moment of the premiere episode, however, as he and Keeley double date with Rebecca (Hannah Waddingham) and her priggish new beau named John (not Stamos). After drinking his way through the man’s boorish speeches, Roy cuts the BS and tells Rebecca what he really thinks in a speech that would make Ted Lasso himself proud.

“He’s fine. That’s it. Nothing wrong with that, most people are fine,” Roy explains. “It’s not about him, it’s about why the f**k you think he deserves you. You deserve someone that makes you feel like you’ve been struck by f**king lightning. Don’t you dare settle for fine.”

The episode ends with a blast from the past, as Roy and his group of “yoga mums” sit down to watch Lust Conquers All, a fictional version of Love Island. Who should show up as the top “scorer” on the island, but Roy’s former Richmond teammate and adversary, Jamie Tartt (Phil Dunster)?

TED TALK (The best references and Ted-isms of the week):