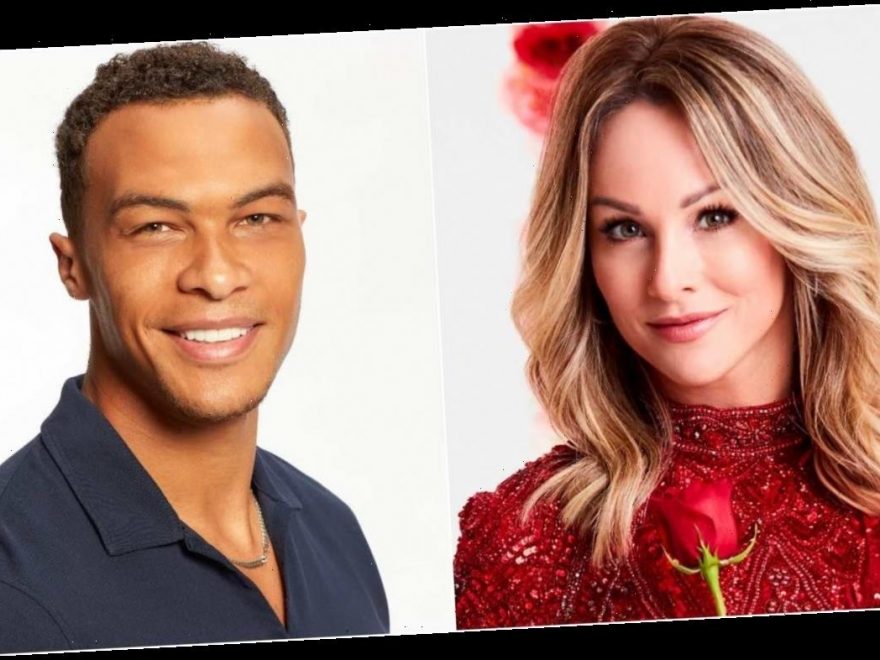 On the season premiere of The Bachelorette, Clare Crawley welcomed 31 new suitors — but had an immediate connection with one in particular.

The 39-year-old hairstylist was instantly smitten with Dale Moss, a 32-year-old former NFL player, stunning host Chris Harrison with her remarks after Dale’s limo entrance: “I definitely feel like I just met my husband.”

“That feeling that I’ve never felt before… just standing in front of a man, connecting on that level, and it being electric between each other – I’ve never felt that instantly like that before,” Clare shared with ET ahead of Tuesday’s premiere, recalling her first encounter with Dale on the show.

“I had never felt it before, and I never even knew what to expect with those feelings. When you have not experienced it or felt it, you don’t know if it exists, but when you feel it, you know exactly what that feeling is.”

However, some of Clare’s remarks about Dale during the premiere left Bachelorette fans wondering if the chemistry was love at first sight or something more…developed. Clare dreamily remarked “I knew it,” after meeting Dale during the limo entrances, and said “I’ve been waiting for this” before the two locked lips later in the episode.

“I feel like Clare and Dale exchanged a few DMs before this conversation,” one fan tweeted, with another remarking, “I do not believe for a second that Dale and Clare didn’t talk before filming but I DON’T CARE.”

I feel like Clare and Dale exchanged a few DMs before this conversation #TheBachelorettepic.twitter.com/pSF9viRMMi

I do not believe for a second that Dale and Clare didn't talk before filming but I DON'T CARE #TheBachelorettepic.twitter.com/vXFKsIQgN6

So, was there something going on between the two before filming even began? Clare was in a unique situation this season, due to the coronavirus production shutdown. Her suitors were announced just before filming was set to begin, but then the cast and crew was sent home in the early days of the pandemic, allowing Clare and the men to have internet and phone access once again.

Harrison told ET that Clare did look up some of her contestants online — some of whom were later recast — but she insisted, both on the show and to ET, that the only suitor she had been in contact with prior to filming was Blake Moynes, whom she praised on the premiere for taking the risk to reach out to her when her mother was hospitalized.

“Blake was the only person that messaged me, the only person I had any contact, talked to, any sort of communication with [ahead of the season],” Clare told ET. “We’re given these rules to respect, the process of it all, and I definitely, 100 percent, respected the process. What he did, and the reason he did that, I also really respect.”

Clare and Blake even shared the first kiss of the season, but her heart certainly seemed to be with Dale — who of course received the coveted First Impression Rose. However, when speaking with ET, Clare played coy on her current relationship status, saying only, “I’m very happy.” She wouldn’t share whether or not she was currently engaged or in love, but did say, “I mean, I feel like there’s so much more to it.”

In a recent interview with ET, Harrison admitted that allowing a Bachelor or Bachelorette the chance to research or contact their potential suitors ahead of filming might become a part of upcoming seasons.

“[Clare] admitted to me that she started looking through and getting an idea of what these guys stood for who they were — not a terrible idea, and maybe that’s something we incorporate into the future of this show,'” he noted.

The Bachelorette airs Tuesdays at 8 p.m. ET/PT on ABC. See more from Clare on what to expect this season in the video below.

‘The Bachelorette’: Clare Crawley Reveals What to Expect From Her Season (Exclusive)