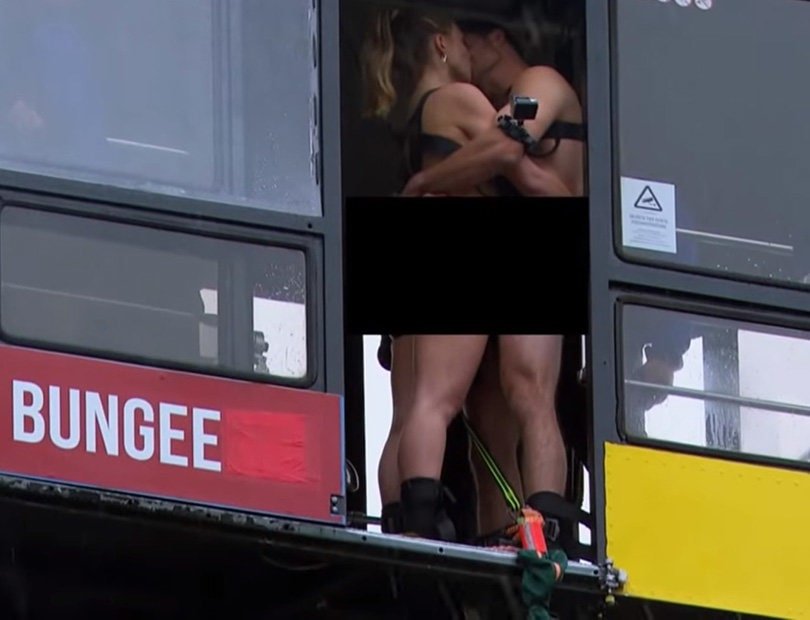 “Her body is her temple and to expose it to anyone who isn’t her husband, that was a slap in my face,” says a guy who is not her husband, either.

Hannah is all about life experiences, and this week on "The Bachelorette," that meant taking part in a naked tandem bungee jumping experience. But she only did that with one of the remaining guys, which did not sit well with another.

We’ll give you three guesses who it was and the first two don’t count.

Of course Luke P didn’t get it because somehow this guy thinks that he and Hannah are already a thing and that she shouldn’t be doing anything with these other guys. Possessive much, dude?

So was this enough for Hannah to finally give in to the fan demands that have been going since the first week of this show and give Luke P the boot. Well, he wasn’t done yelling at her first.

That’s right, it wasn’t enough for Luke to get all butt-hurt that Hannah did something with someone who wasn’t him on a reality show about her dating a bunch of guys at the same time. He had to confront her about it so she would know that he was upset and he could try to get her to understand how it’s her fault that he’s upset.

"Have you ever been cheated on in your relationship?" he said in the middle of a group date Hannah was actually enjoying. "You know that feeling, your stomach turns inside out? It’s just twisted. I’m not gonna lie, I had that feeling this morning."

Again, he is on a GROUP DATE with her right now. A group date. As in more than one person. Hannah is not his so how could she be cheating on him by participating in this show they both signed up for. Sigh, Luke frustrates our brain.

He didn’t stop there, either. "We were about to get sent off for the group date and Garrett stated blurting out a whole bunch of stuff about what happened with you guys on the one-and-one and honestly, like it was hard for me to receive," he told her. "And it’s just because I know that your body is a temple and honestly I’m just thinking of you holding him, bare-skinned and I’m just thinking in my mind it just pissed me off, it really frustrated me."

Honestly, this is a Luke problem and not at all a Hannah problem. But Hannah, who has been struggling with confused feelings about Luke all season — or producers are telling her to keep him in because he’s the kind of TV that viewers love to hate — nevertheless tried to make him feel better about it … at first.

"It wasn’t in a sexual way. It was in an experience that I wanted to have for myself," she told him. The group was in Latvia, and naked bungee jumping is apparently a tradition there.

"Is this like when you’re an official couple kind of tradition?" Luke asked Hannah when she told the guys about it, which just screams insecurity. Or perhaps control.

Luke was even more aggressive in the confessionals, saying, "This is sheer fact. I mean, this is a woman I want to spend the rest of my life with and totally thought that was crossing a line. Her body is her temple and to expose it to anyone who isn’t her husband, that was a slap in my face. If she really is the one for me, which I believe she is, there’s a lot of answers that I need."

His overall tone didn’t sit well with Hannah either after he confronted her about it, and so she respectfully went to tell him how she feels. And yes, somehow she was still respectful. "The issues were the language that you used to describe why you were upset," she told him. "You felt like it was a slap in the face because you want to spend the rest of your life with me and then you said, ‘We all make boneheaded mistakes.’"

She went on to tell him, "I told you it wasn’t a sexual thing at all and it wasn’t. But even if it was, at this point it doesn’t matter because you’re not my husband. You don’t own my body, you don’t own me. It’s my body."

Luke, clearly sensing that he’d crossed a line, started amending his earlier statements by telling her that he would never try to control her or tell her what she can and cannot do with her own body. "But when we get into things I brought up," he said. "I was not referring to that. I was referring to the future."

Wait, so he intends to control her body in the future? Or did he forget that he’d already said he was "pissed off" and "frustrated" that she was naked with Garrett because her "body is a temple." He also said in the confessional that she crossed a line and shouldn’t show her body to anyone who isn’t her husband, so what part of that is him not wanting to control her body and what she does with it? Or at least certainly wanting to do that as her husband.

And yet somehow, amazingly, Luke continus to get rose after rose after rose from this girl. This week, she booted Dustin and Dylan, catapulting Luke into the Top 7 alongside Connor, Garrett, Jed, Mike, Peter and Tyler C.

Hopefully she doesn’t have too much fun with any of those other six in future installments, because Luke has already claimed her as his and he definitely seems to be the jealous type!

"The Bachelorette" airs every Monday at 8 p.m. ET on ABC.