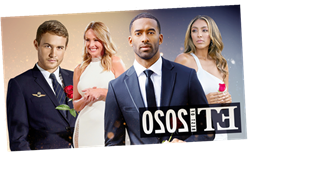 2020 shifted everything about the Bachelor franchise, and not just because the coronavirus pandemic made it hard for filming. Things were abnormal from the start.

Our new Bachelor season started with the lead, Peter Weber, considering giving things another go with his ex, former Bachelorette Hannah Brown. His cycle ended with one of the most shocking finales in franchise history (and most memorable moms), and the drama continued offscreen.

The COVID-19 outbreak postponed The Bachelorette, but in the meantime, the franchise made strides in its diversity efforts. Amid a nationwide racial reckoning, Matt James was named the first Black Bachelor.

Then, Clare Crawley finally got her chance at love, but found it even quicker than The Bachelorette had planned for. In another franchise first, a show’s lead was replaced two weeks into filming. Tayshia Adams stepped in — and gave the series another happy ending.

But that’s not all that went down. From breakups to makeups to quarantine crews, here are the biggest Bachelor Nation moments of 2020.