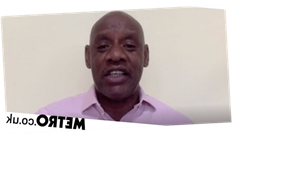 The Chase star Shaun Wallace has supported calls for Black history to be taught in schools, as he’s confident it will improve society’s ‘respect’ for BAME (Black, Asian and minority ethnic) groups.

Shaun has celebrated Black History Month by voicing Good Morning Britain’s Black Icons segment through October, which highlights the figures who have made astonishing contributions to the Afro-Caribbean community.

Since the Black Lives Matter movement gathered momentum this year, there have been petitions calling for topics and events from Black history added to the national curriculum.

Addressing the suggestion, Shaun said on Monday’s GMB: ‘We do live in a diverse culture. The one thing I was asked the other day in relation to whether we should actually incorporate Black history and other forms of culture into our curriculum.

‘I think that’ll give us a greater understanding and a greater respect for the citizens of this country.’

Social enterprise The Black Curriculum, which launched in January last year, recently renewed calls for the government to incorporate Black histories in UK schools after decades of young people not being ‘given a full or accurate version of British history’.

The education organisation has ramped up the pressure after weeks of feeling ‘grief-stricken,’ as the Covid-19 pandemic continues to disproportionately affect BAME people, while Black Lives Matter protests expanded across the world following the killing of George Floyd.

Campaigners have encouraged the public to sign an open letter to Education Secretary Gavin Williamson, urging the Department for Education (DfE) to make Black history mandatory on the national curriculum for pupils aged eight to 16.