On December 9, IndieWire will showcase some of the best Oscar-qualified short films of the year, at an event in Los Angeles co-hosted by ShortsTV and National Geographic Documentary Films. The program will also include a conversation with Oscar winner Cynthia Wade and a sneak peek at her new short film, “The Flagmakers.” Apply to attend the event here.

Acclaimed documentarians Cynthia Wade and Sharon Liese have run the merit of short films up the flagpole — Wade even won an Oscar for one, “Freeheld,” in 2007 — and discovered that shorts are superior to feature-length documentaries for one reason above all: People lose interest fast.

“We both made feature docs and series, and feature docs are just too long,” Wade said in an interview with her co-director. “Docs are the best thing in the world, but it’s a lot to ask of people. We just felt like we could be very efficient. There is an economy to being able to tell a full story in a short amount of time. That is the best way to tell a story in a film, because people’s time is precious.”

The directors of this year’s Oscar-contending short “The Flagmakers” spent three years at Eder Flag factory in Oak Creek, Wisconsin, the largest U.S.-based manufacturer of American flags. Eder Flag produced the flags that flanked Vice President Kamala Harris during her acceptance speech at the Democratic National Convention, and fly high at the Statue of Liberty. The women-run, employee-owned business produces five million flags per year and predominantly employees immigrants and refugees as seamstresses. The short film begs the lofty question: Who is the American flag really for?

The film spans three years in 35 minutes, from the start of the pandemic to the aftermath of the January 6 insurrection.

“It takes more restraint and it’s harder obviously when you have to tell something in shorter amount of time,” Liese said, “but we both really like that challenge and we felt it was the best expression of this material.”

Despite their success with the format, the filmmakers said the challenge of getting short-form documentaries made hadn’t gone away.

“Filmmakers are inherently risk takers,” Wade said. “People on the other side of the table who have money or are the gatekeepers, they can’t see it before it’s been breathed into life. They don’t have the same risk tolerance, I think.” 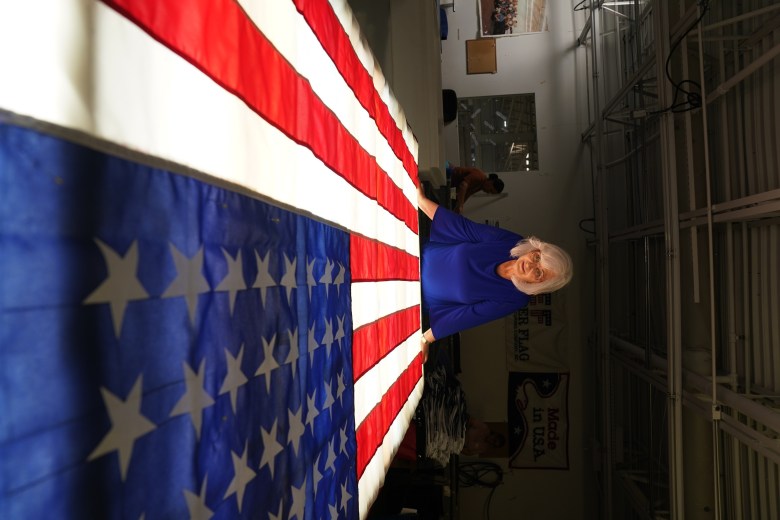 Wade, whom Liese called “the rainmaker,” added that it was “critical” to receive a Catapult grant early on in the production process. “Thank god, because they’ve done this with a couple of my films and it literally catapults you to say, ‘OK, we’ve got it,’” Wade said. “But really, this was networking with people who just have more money than we have, who were just wealthy individuals or friends of friends of friends who were like, ‘This is cool,’ or ‘I believe in this because I’ve seen your other films,’ or, ‘Wow, the ideas that immigrants and refugees are literally sewing these stars.’”

The film also touches on the differing political ideologies of its subjects. “There isn’t a side A and a side B, or a good and a bad,” Wade said. “It’s messy, it’s gray, it’s nuanced, and those are the films we like to make. So some of the funders were kind of interested in that and would be like, ‘Wow this could really open up a dialogue’ or just see it in a different way, for people who thought the flag was co-opted from them because it could represent a kind of ideology or political belief that they are not aligned with.”

She added that since the Eder Flag factory is such a “visual tapestry” woven with the diversity of its employees and richness of the sewing process for flags, the majority of funding went into high-quality lenses for cinematographer Boaz Freund.

“This was an independent film for a long time and we raised money the hard way, the way every documentary filmmaker does. But anytime we’d raise any money, we wanted to put it into prime lenses,” Wade said. “I really wanted to be thinking about, if we’re using a 14 or an 18 which is a really wide lens, to get that scope not just of the factory but of the flag itself, obviously the symbolism of the threads of our country and the sewing and everything.”

Wade and Liese filmed “Flagmakers” beginning in 2019; the film inevitably charted the COVID-19 pandemic effects on the factory, as well as the repercussions of the January 6 insurrection in 2021. 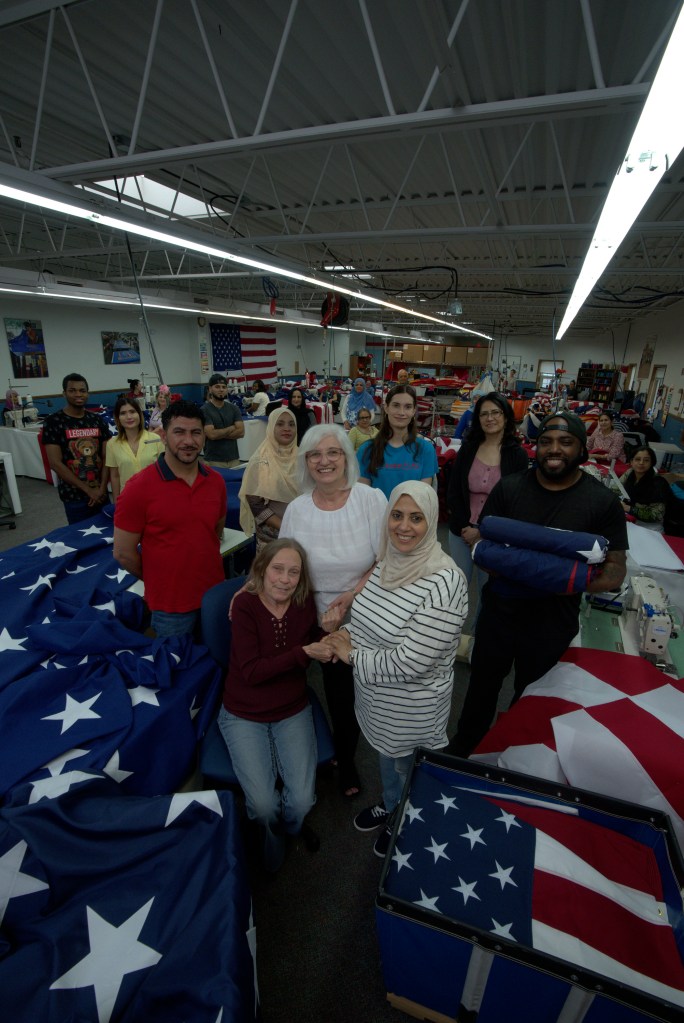 For several months during the first stage of the pandemic, the directors couldn’t access the factory. “Sharon and I were driving around the country and going, ‘OK, maybe we need to pivot and follow some of these flags where they end up,’” Wade said. “So we actually went out during 2020 and we got all these community stories thinking, ‘Well, maybe that’s how we have to do it,’ and only have the factory as the scaffolding at the beginning and end. But then as things eased, as we spent two weeks quarantining in the Midwest to get back in there for each shoot, we just realized, ‘No, the story is really there. … I’m not sure any other flag factory would have allowed us to do that, but I am incredibly grateful.”

Wade said that the insurrection was “terrifying” to the Eder Flag board, but they weren’t scared off by the project. “It is not a work for hire, it’s entirely independent, and they said, ‘We totally stand by this film,’” she said. “‘If we end up having to lose customers over this, we will lose customers over this because this is a true representation of who we are, and of who we aspire to be.’ In a way, it’s a mini-America in that factory and that is what we were looking for.”

Both directors have a lot in the pipeline: Liese is helming an upcoming four-episode docuseries about a religious cult for Starz, and Wade is hot off of AppleTV+’s “Gutsy” series with Hillary Clinton, plus a June 2023 verité series for Netflix. However, the story of “Flagmakers” is only just getting started. The directors’ three years’ worth of footage for the short film can lend itself to a docuseries of its own, and the duo have been approached by Tony-winning “Come From Away” producers to turn the short film into a Broadway musical.

“There are more stories that we want to tell and we have the footage and have been looking at a series,” Liese said. “The film has also been optioned for a Broadway musical. There is so much depth to these stories and more stories that could be told.”

Academy Members, Guild Members, Members of the Industry and fans may apply to attend IndieWire’s upcoming short film event here. (Capacity is limited; an application does not guarantee admission.) A limited number of tickets for the short film event will be available exclusively to LA3C passholders, who will also have access to additional events the same week hosted by fellow Penske brands Deadline, The Hollywood Reporter, SHE Media, Vibe, Variety, and Women’s Wear Daily.