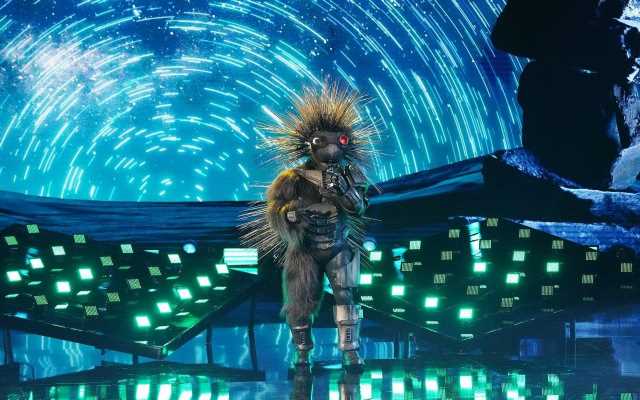 In the new outing of the hit FOX show which is titled ‘Spicy 6’, ‘This Is Us’ actress Chrissy Metz joins as a guest panelist with the Yeti being the night’s first performer.

AceShowbiz -A new episode of “The Masked Singer” arrived on Wednesday, May 5. In the new outing, which was titled “Spicy 6”, “This Is Us” actress Chrissy Metz joined as a guest panelist with the Yeti being the night’s first performer. Singing “It Takes Two” by Rob Base & DJ EZ Rock, he flaunted his rap skills.

Additionally, the Yeti showed off his impressive dance moves. The panelists were totally impressed by the performance. As for his final clue, it included an ear of corn, which he claimed to pop into his mind. The guesses included Vin Diesel, Jason Derulo, Trey Songz and Miguel.

The next performance was from the Robopine. Singing “Water Runs Dry” by Boyz II Men, he included a light bulb in his final clue. Among the guesses were Usher, Forest Whitaker, Tyrese Gibson and Tank. Following it up was the Piglet, who opted to sing “Against All Odds (Take a Look at Me Now)” by Phil Collins. He had a Cluedle-Doo in his final clue and the panelists believed that the Piglet might be Taylor Lautner, Robert Pattinson, Brian Littrell or Nick Lachey.

The Black Swan, meanwhile, claimed in her clues that that she was in a cabaret. She also had an umbrella over two plastic cups in addition to Mariah Carey in her final clues. For the night, the Black Swan chose to perform “Do I Do” by Stevie Wonder. The panelists guessed Kesha (Ke$ha), Christina Milian or Mandy Moore.

Up next were the Russian Dolls, though only two of them hit the stage that night to perform “Shallow” by Lady GaGa and Bradley Cooper. Meanwhile, their final clue revealed a kangaroo. Hanson, Nickelback, Avril Lavigne and Chad Kroeger‘s names were thrown as the guesses.

Rounding out the night was the Chameleon. Donning a glow-in-the-dark outfit, he sang “Put Your Hands Where My Eyes Could See” by Busta Rhymes. He had a pair of sneakers as his final clue, saying that it should take us a step in the right direction. Young Thug and Snoop Dogg were among the guesses.

Following a voting process, it was then revealed that the Robopine was eliminated. Before he got unmasked, the panelist made their final guesses. Nicole Scherzinger, Jenny McCarthy and Ken Jeong initially picked Jamie Foxx. Jenny stuck with her guess, while Nicole changed to Tyrese. Ken said the Robopine could be Wesley Snipes. Robin Thicke guessed Terrence Howard, while Chrissy joined Nicole by guessing Tyrese. The Robopine was indeed Tyrese!