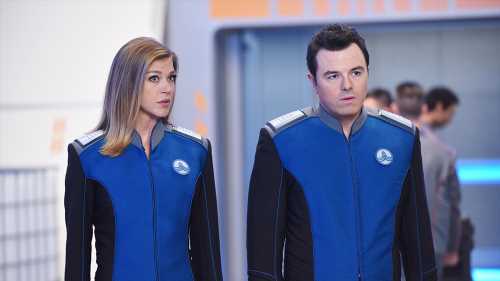 Seth MacFarlane’s hit space adventure series The Orville is moving to Hulu from Fox for its upcoming third season. The series will be available exclusively on the streaming service as a Hulu Original in late 2020. MacFarlane made the announcement today during the show’s panel at Comic-Con in San Diego.

As for the decision to move the series, which was renewed by Fox for a third season in May, Deadline hears the show has evolved and production timelines have pushed delivery, making what was planned as a mid-season debut difficult. The show has a passionate fan base, and Hulu was able to step in as a home where the show can continue. Following Disney’s acquisition of 21st Century Fox assets, Hulu is now a corporate sibling to The Orville producer 20th TV, where MacFarlane has long been under a deal, but Fox no longer is.

“The Orville has been a labor of love for me, and there are two companies which have supported that vision in a big way: 20th Century Fox Television, where I’ve had a deal since the start of my career, and Fox Broadcasting Company, now Fox Entertainment, which has been my broadcast home for over 20 years,” MacFarlane said in announcing the move.

“My friends at the network understood what I was trying to do with this series, and they’ve done a spectacular job of marketing, launching and programming it for these past two seasons. But as the show has evolved and become more ambitious production-wise, I determined that I would not be able to deliver episodes until 2020, which would be challenging for the network,” MacFarlane continued. “So we began to discuss how best to support the third season in a way that worked for the show. It’s exactly this kind of willingness to accommodate a show’s creative needs that’s made me want to stick around for so long. I am hugely indebted to Charlie Collier and Fox Entertainment for their generosity and look forward to developing future projects there. And to my new friends at Hulu, I look forward to our new partnership exploring the galaxy together.”

Created and written by MacFarlane, the hour-long sci-fi adventure series is set 400 years in the future and follows The U.S.S. Orville, a mid-level exploratory spaceship. Its crew, both human and alien, face the wonders and dangers of outer space, while also dealing with the problems of everyday life. MacFarlane plays Capt. Ed Mercer, and directed some episodes.

“Fox Entertainment has been a fantastic home for The Orville and their willingness to support the show’s move to Hulu is incredibly appreciated; they really are great partners to us on so many shows and this is one more example. We’re thrilled as a studio to find this creative solution which is so meaningful to Seth and keeps the show on track to continue entertaining its millions of fans,” said Carolyn Cassidy, President of Creative Affairs, 20th Century Fox Television.

It’s unusual, but not unheard of that a series moves to a new home after renewal by another network.
Psychological thriller series You had been renewed by its original network Lifetime before moving to Netflix, and The Mindy Project also moved from Fox to Hulu, though it was at the time of renewal when it was clear Fox would not renew it.

The Orville has developed a devoted fan following and excels in delayed and on-demand viewing. In its first season on Fox, it averaged 10.7 million total viewers in multi-platform audience, up 149% from its Live+Same Day delivery. In Season 2, The Orville averaged 1.4 and 1.81 million viewers in adults 18-49 and 5.4 million total viewers. Its Season 2 ender drew a 0.7 rating and 2.92 million viewers in Live+Same Day.

“We know our viewers are huge fans of The Orville, along with many of Seth MacFarlane’s groundbreaking hit shows, and we can’t wait to bring Season 3 to them exclusively on the platform,” said Craig Erwich, SVP Content Development, Hulu. “Hulu is a home for the world’s most sought-after creative talent, and we’re incredibly excited to welcome Seth and the entire cast and creative team of The Orville to our Hulu Originals slate.”

The third season of The Orville will join Hulu’s lineup of genre programming including the Emmy-nominated Castle Rock from J.J. Abrams and Stephen King, Marvel’s Runaways, Future Man from Seth Rogen, the Into the Dark franchise from Blumhouse Television and the upcoming hyper-noir drama series Reprisal starring Abigail Spencer. It also joins MacFarlane’s other series on Hulu, including American Dad and Family Guy.