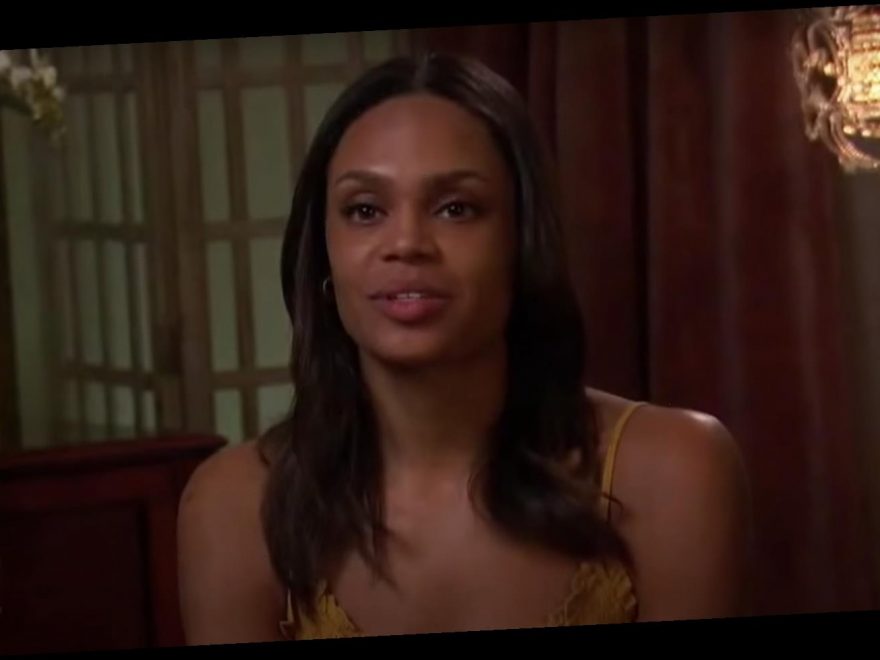 Matt James is ready to find love and he’s taking his chances on ABC’s The Bachelor! Matt met dozens of beautiful women during the Season 25 premiere on Monday, Jan. 4, 2021. But which contestant will he end up with? You will have to keep watching to find out!

The highly anticipated season — starring the first Black male lead in The Bachelor‘s history — kicked off with Matt meeting his stunning female suitors, one of which will be his blushing bride at the end of this (hopefully). The heartthrob chatted with the women before handing his first-impression rose to contestant Abigail Heringer.

Yet, while the 25-year-old client financial manager from Oregon, who is the first hearing-impaired contestant to appear on the franchise, may have caught Matt’s eye, he also showed interest many of the other women. According to the famed Bachelor Nation blogger Reality Steve (via Parade), there are already some guesses as to who Matt will select as his future spouse.

Could it be Michelle Young? You are probably wondering who the heck we are talking about, but fans have yet to meet this gorgeous contestant because she technically has not joined the show just yet. Reality Steve reports Michelle is expected to show up after the second rose ceremony.

So who is this lovely lady who will soon vie for Matt’s heart? Keep scrolling to learn more about Michelle.

Michelle Young is giving love a shot on Matt James’ season of The Bachelor. You might recognize the green-eyed beauty from the previews, but a lot of information about Michelle remained a mystery until the season premiered.

This is because Michelle is one of five women who were added to the show after filming commenced, The Sun reported. Her addition to the show also explains why she does not have an official bio page on the ABC website — and why we have not seen her in any cast line-ups.

Although fans have yet to see her on-screen with Matt during Season 25, she showcased her vibrant personality and lovable demeanor as she cuddled up with the handsome hunk in the previews. In one clip, the brunette beauty was seen sharing a romantic moment with Matt during a one-on-one date, as well as kissing in the pool during another moment together.  It looks like we best get acquainted with Michelle (because Matt certainly has)!

Even though fans are still learning about Michelle Young, we already know the contestant is from Woodbury, Minn. (via The Sun). Michelle said goodbye to her home when she landed a spot on Season 25 of The Bachelor, which was filmed at the Nemacolin Woodlands Resort in western Pennsylvania rather than the notorious Bachelor mansion in California (via House Beautiful).

Unlike most contestants, Michelle is quite inactive on social media. In fact, she has only posted three times on her personal Instagram page since creating her account in April 2020. For her debut, she shared a breathtaking photo of her wearing a black tank top and white paperbag skirt. “A little late to the Instagram party but, I made it,” she jokingly captioned the post.

Michelle also shared a selfie in honor of her longtime friend Cassie’s birthday in May 2020. “Screaming happy birthday all the way from Minnesota to one of my closest gals! Love you, Cass!” she gushed. Michelle then shared a pic of her sitting on a basketball for her latest post in December 2020, writing, “50% missing the game. 40% missing the camaraderie. 10% missing the grind. 0% missing the conditioning workout.”

Information regarding Michelle’s line of work is still unknown — but might she have been hinting at a professional basketball career?

Michelle Young will probably be around for quite some time

Each and every woman on The Bachelor has a lot to offer, but at the end of the day, Matt James can only choose one. For Michelle Young, the Minnesota native had a feeling that she could be the frontman’s perfect match. “I’ve potentially found someone who is going to change the world with me,” she proclaimed during a preview of The Bachelor.

Well, it seems Michelle has a big chance of being the one to whom Matt proposes. According to Reality Steve, Michelle is one of the lucky ladies in Matt’s coveted final four. The trusty blogger reports that Michelle makes it to hometown dates. Will Matt travel to Minnesota to meet her family, or will her family make the trip to Pennsylvania for makeshift hometown dates like those upon which The Bachelorette‘s Tayshia Adams and her final four embarked?

Michelle is not the only one competing for Matt’s final rose, though. Reality Steve reports contestants, including Serena Pitt and Rachael Kirkconnell, will also still be vying for his love at that point in the competition, as well as a fourth potential lover, Bri Springs. While the blogger “was told” Bri was one of the final four, he has not “gotten the confirmation” just yet. The only way to know is by watching!

Matt James was meant to make The Bachelor history

Now that you are familiar with some of Matt James’ gorgeous gals, it’s time for you to meet The Bachelor himself. Usually, the frontman is chosen from the casts of seasons past, but Matt appeared on the show without ever starring in the franchise.

Fans fell in love with Matt when his famous BFF and former The Bachelorette runner-up Tyler Cameron introduced Matt on social media. After gaining a fan base, he was cast on Clare Crawley’s season of The Bachelorette, which aired in December 2020. However, the coronavirus pandemic put a pause on filming, and by that time, Matt was cast as The Bachelor after an uproar from those calling for more diversity.

“When filming couldn’t move forward as planned, we were given the benefit of time to get to know Matt, and all agreed he would make a perfect Bachelor,” ABC Entertainment president Karey Burke said of the decision (via Vulture). “We know we have a responsibility to make sure the love stories we’re seeing onscreen are representative of the world we live in and we are proudly in service to our audience. This is just the beginning and we will continue to take action with regard to diversity issues on this franchise.”

Matt might be making history with his role on The Bachelor, but it certainly does not hurt that he’s also easy on the eyes.