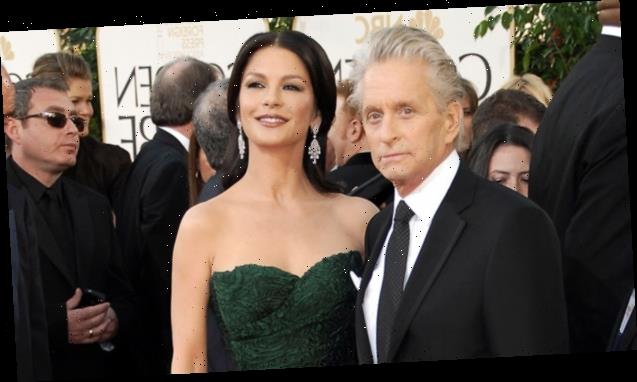 Catherine Zeta-Jones took to Instagram to share a lovely photo of her and her husband of 20 years, Michael Douglas locking lips along with a quote from William Shakespeare about the ‘kind sign of love’.

Catherine Zeta-Jones, 51, and husband Michael Douglas, 76, look more in love than ever in their latest PDA-filled pic! The actress shared the gorgeous outside photo, which shows them sharing a smooch in front of a beautiful sunset, to Instagram on Jan. 5. She also captioned it with a romantic quote from none other than William Shakespeare.

“I can express no kinder sign of love, than this kind kiss” William Shakespeare……. 💋,” the caption read.

As soon as Catherina posted the sweet pic and caption, her followers were quick to leave comments about how much they adored the post. “lovely couple,” one wrote while another called them “beautiful.” A third gushed that the photo was “the best picture ever” and a fourth wrote, “forever kind of love.” Many more left red heart emojis.

Catherine’s post comes less than two months after she and the actor celebrated their 20th wedding anniversary on Nov. 18. The dark-haired beauty took to Instagram for the special occasion and shared a stunning video that showed various pics of them on their wedding day in 2000, which can be seen below. It also included cozy pics from photoshoots and candid shots.

“20 years ago today Michael and I were married!! What an amazing magical night that was! And 7304.85 days and nights on, I love you now as I did then. ( except for the point 85 bit) 😂 Thank you for the love and laughter. ❤️❤️❤️❤️,” she wrote in the caption for the clip.

Michael also took to his Instagram to share his own anniversary post. It included a wedding pic and audio clip of him explaining how he met Catherine as well as how “incredible” he thinks she is. “Happy 20th Anniversary my darling! I love you always and forever @catherinezetajones ❤️ (Volume ⬆️) #20years,” he wrote alongside the post.

When Catherine and Michael are not gushing over each other, they’re spending time taking in the joy of their kids. The lovebirds recently celebrated the arrival of Michael’s second grandson, Ryder T. Douglas, on Dec. 22. The Don’t Say A Word star’s son Cameron Douglas, 42, whom he shares with his ex-wife Diandra Luker, is the father of Ryder, and after the proud dad shared a family pic with the newborn on social media, both Catherine, who is the baby’s step-grandmother, and Michael left ecstatic comments.

“Lua’s Face! like ……’whatever’……’ Hilarious! Congrats!!” Catherine wrote in reference to Cameron’s three-year-old daughter’s expression in the pic. Michael congratulated his son and his daughter-in-law Viviane while also mentioning Lua. “So happy for Vivian and you. Don’t think Lua is sure about this yet! What a holiday present,” he wrote.