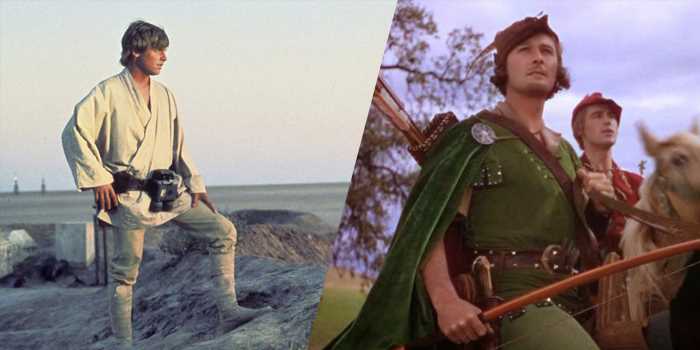 (Welcome to The Movies That Made Star Wars, a series where we explore the films and television properties that inspired George Lucas’s iconic universe. In this edition: The classic adventure film The Adventures of Robin Hood.)

In The Making of Star Wars, Martin Scorsese talked about George Lucas and his work on Star Wars. “I remember George was writing Star Wars at the time. He had all these books with him, like Isaac Asimov’s Guide to the Bible, and he was envisioning this fantasy epic. He did explain that he wanted to tap into the collective unconscious of fairy tales. And he screened certain movies, like…Michael Curtiz’s Robin Hood [1938].”

Revisiting the classic film and thinking about it in the context of Star Wars, it’s no wonder George Lucas would have been screening it during the lead-up to the making of his original groundbreaking film. The film is, perhaps, the first, best distillation of the Robin Hood myths and the set the tone for all future iterations of the character. This codified the myth into the popular culture and was one of the highest grossing films of 1938. Interestingly enough, James Cagney was originally cast to play the titular character before walking off the set. He was replaced by relative newcomer Errol Flynn. It was Flynn’s casting that really defined the movie for generations and it’s difficult to imagine anyone else in the role, let alone Cagney.

A Sense of Fun

The film, more than anything, is just fun. If a smile doesn’t creep across your face as you watch The Adventures of Robin Hood, that says more about you than it does the film. Errol Flynn exudes exuberance that can’t be understated as the beating heart of the film and his confident swagger could easily have been a reference for Han Solo in A New Hope.

Flynn makes The Adventures of Robin Hood a joy to watch. It’s as simple as that. When you watch the original Star Wars film, the same giddiness pervades every shot.

Even Luke Skywalker gets some of the Errol Flynn swagger in Return of the Jedi, coming right into Jabba’s Palace and making threats despite the closing trap with the same aplomb as Robin Hood bringing a royal deer to Prince John’s feast.

It’s easy to see another direct correlation between Olivia DeHavilland’s Maid Marion and Carrie Fisher’s Princess Leia. Not only is she a strong-willed woman with her own agenda, she shares some of the same repartee with Eroll Flynn that Carrie Fisher did with Harrison Ford.

In one scene, Marion tells Robin, “You speak treason.”

He fires back with a smile, “Fluently.”

The sniping that doubles as flirting feels very familiar to fans of Star Wars.

Things don’t end there, though. The shots of DeHavilland and Basil Rathbone are shot and treated very much like the scenes between Princess Leia and Governor Tarkin. They have the same disgusted but respectful sort of dialogue for each other.

It wasn’t just the tone of fun and the banter between heroes and villains, there were specific touchstones in filmmaking that George Lucas brought to bear that are reminiscent of this film he screened for himself as he sought inspiration.

The Adventures of Robin Hood might not seem like it was a technical marvel of filmmaking and pushing boundaries, but it was exactly that. The film was an early example of the rich history of Technicolor (and a full year before The Wizard of Oz and Gone With the Wind), and employed all 11 cameras Technicolor had built to that point.

The film also begins with what is essentially an opening crawl, offering a view of what has come before to give us enough context about what we’re going to see. George Lucas famously used this technique for the opening of Star Wars. Granted, it also appeared in Flash Gordon serials around the same time, this could only reinforce the notion to use it for A New Hope.

The most compelling tie in the filmmaking might come from the involvement of Erich Korngold. Korngold crafted the score for Robin Hood and he even wrote the iconic 20th Century Fox fanfare that accompanied Star Wars through its first 30 years. John Williams cites Korngold and his style of music composition as a particular influence on his career as a whole and Star Wars in particular. In a 1998 interview with Star Wars Insider, Williams said, “I’ve been particularly fascinated with the émigrés from Europe in the 1930s — people like Max Steiner and Erich Korngold, but also Vernon Duke and Kurt Weill, who came with Billy Wilder and Ernst Lubitsch to Hollywood. They brought this tremendous European culture. In a certain sense, my colleagues and I are the artistic grandchildren of these men. We have been the beneficiaries of a rich tradition that grew up here in the early days of sound, in the 1930s and 40s.”

The swashbuckling nature of the film might be the most prevalent tie to Star Wars. The fights are hyperbolic in their scale, cartoons turned up to eleven. Everything is taken to a level of hyperreality that exudes that same “fun” from before.

In one particular scene, a straight line can be drawn from Robin Hood to Return of the Jedi, where Robin and his Merry Men descend from the trees just like Ewoks. They fly from trees on ropes just the way those furry little bastards took down the entire empire. “Dare to be cute,” was George Lucas’s mantra through the making of Return of the Jedi, but reviewing The Adventures of Robin Hood makes one wonder if “Dare to be fun” could have easily replaced it.

The Adventures of Robin Hood is the film equivalent of soothing balm. It’s the sort of film that helps your heart smile and does you good. It’s a mythic story of good and evil, of right and wrong. And it portrays a black and white value set in brilliant Technicolor.

It teaches lessons and warms hearts.

And not only did it get the legend of Robin Hood, of medieval heroes and villains, right, it got them so right that its distillation of the myth is still the gold standard almost a century later.

In 2003, Roger Ebert wrote, “The ideal hero must do good, defeat evil, have a good time, and win the girl. The Adventures of Robin Hood is like a textbook on how to get that right.”

And it’s no wonder he got it right.