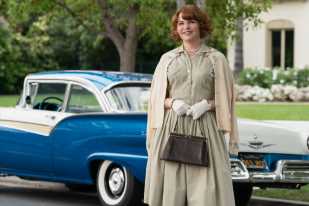 CBS All Access released the trailer for upcoming series “Why Women Kill,” and Ginnifer Goodwin just wants to know when her cheating husband will just die already.

“Penny for your thoughts?” her husband asks while chewing loudly on meatloaf.

Goodwin, casually clutching a knife, says, “I was wondering when you’ll die.”

His response is a slightly nervous, “I’m not dying anytime soon,” — to which Goodwin replies, “You don’t know that.”

The ten-episode drama series from “Desperate Housewives” creator Marc Cherry premiere on Aug. 15, and will air weekly on Thursdays. You can watch the trailer above.

“Why Women Kill” stars Ginnifer Goodwin, Lucy Liu and Kirby Howell-Baptiste. The “darkly comedic” drama centers on three different women — a housewife in the ’60s (Goodwin), a socialite in the ’80s (Liu) and a lawyer in 2018 (Howell-Baptiste) — who are dealing with infidelity in their marriages. All three stories take place within the same house. Goodwin will play Beth Ann, a woman aspiring to be the ideal housewife in 1963. Liu plays Simone, a stylish woman who’s the picture of urbane confidence. And Howell-Baptiste stars as Taylor, a fiercely intelligent lawyer.

“Why Women Kill” premieres August 15 on CBS All Access.