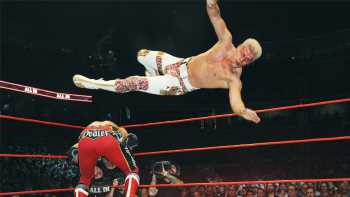 All Elite Wrestling (AEW) will not be kickstarting a new chapter in the Monday Night Wars.

WarnerMedia announced Wednesday at the Television Critics Association summer press tour that AEW will begin airing live weekly shows on TNT beginning Wednesday, Oct. 2 from 8-10 p.m. ET. However, the debut comes just two days before WWE will debut “SmackDown Live” on Fox, with that show moving to the broadcaster’s Friday lineup on Oct. 4.

The televised show will take place in different cities across the nation each week, starting in Washington, D.C., at the Capital One Arena. Ticket pricing and on-sale date for the first event will be announced on July 29 at 12 p.m. ET via AEW’s social media platforms.

AEW’s current talent roster is headlined by members of a group known to fans as The Elite — The Young Bucks (Matt and Nick Jackson), Kenny Omega, Cody and Brandi Rhodes, and “Hangman” Adam Page. The Young Bucks, Omega, and Cody are also executive vice presidents at the company, while Brandi is also chief brand officer. Former WWE champions Chris Jericho and Jon Moxley (formerly Dean Ambrose) and former WWE commentator and executive Jim Ross are also signed to AEW, as are several other well-known independent wrestling stars. AEW was founded by president and CEO Tony Khan.

AEW has already begun running live events, including Double or Nothing, Fyter Fest, and Fight for the Fallen. All of the events were streamed on B/R Live. The company’s next event, All Out, will take place in Chicago on Aug. 31 at the Sears Center. It will also stream on B/R Live.